Imran Khan says state’s intere­sts will be kept suprem­e at all costs
By Our Correspondent
Published: January 14, 2019
Tweet Email 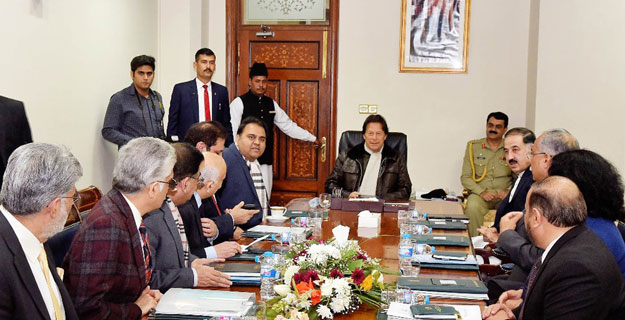 Prime Minister Imran Khan said on Monday the Pakistan Tehreek-e-Insaf government was implementing its policy of structural reforms in the current system and this process would continue without any interruption despite ongoing “fabricated propaganda” against his government.

Chairing a meeting of the heads of different departments of the information ministry, including Information Minister Fawad Chaudhry and special assistants Iftikhar Durrani and Yousuf Baig Mirza in Islamabad, Khan said the government efforts aimed at the betterment of the country and its citizens.

“The process of bringing structural reforms is always a painful phase in a nation’s history, but countries are ushered into a new and more prosperous era on its completion,” Khan said. “Everyone, in or outside the government, belongs to state … the state’s interests will be kept supreme at all costs.”

PM Imran will be brought to his knees very soon: Hamza Shehbaz

He told the meeting that the PTI was aware of the “fabricated propaganda” against it and the reasons behind it. He stressed need for unmasking the “nefarious agenda” of those elements. “No civilised and responsible society allows propagation of unfounded and fabricated news,” he said.

The prime minister told the participants that coordination with the media would be increased in order to achieve the common goal of discouraging the “fake news”. He asked the information ministry to play its role in projecting government’s reforms agenda and its objectives.

Khan said a strong, vibrant and responsible media played a pivotal role in development of the country and keeping the people well-informed. He also asked the public relations officers of the ministries to play a more active role in ensuring access to accurate information to the media.

Separately, Prime Minister Khan chaired a high-level meeting on Monday to discuss issues related to maritime affairs. The meeting formed an Inter-ministerial committee, comprising senior representatives from the ministries concerned and the Naval Headquarters under the maritime affairs minister to propose reforms in the maritime sector.

He said the ruling party was fully aware of the ‘fabricated propaganda’ aimed at it and the reasons behind it, stressing need to unmask the ‘nefarious agenda’ of some elements.

“No civilised and responsible society allows propagation of unfounded and fabricated news,” said the premier, adding that coordination with the media will be increased in order to achieve the common goal of discouraging the ‘fake news’.

“Everyone, in or outside the government, belongs to state … state’s interests will be kept supreme at all costs.”

Earlier in the day, PML-N leader Hamza Shehbaz hit out at the PTI-led government, saying the PM would be forced to apologise to his voters over the dismal performance.

“The day is not far when he [PM Imran] will be compelled to go atop a container once again and say he has failed the people of Pakistan owing to his government’s policies,” he said while talking to reporters in Lahore.

Aleema, however, has refuted the allegations, saying that she earned her wealth through ‘sewing machine business’, which she maintained was a very profitable business generating massive revenue for the country.

Zardari asks govt to rein in NAB ‘for its own sake’