Home side won third and final Test of the series by 107 runs
By News Desk
Published: January 14, 2019
Tweet Email 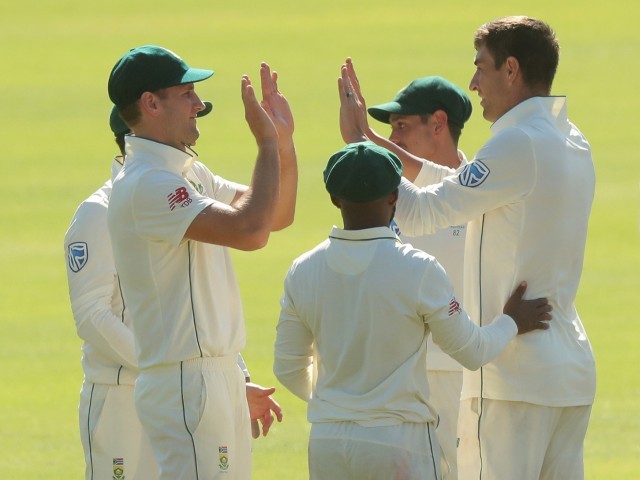 South Africa have defeated Pakistan by 107 runs in the third and final Test match of the series at the Wanderers Stadium in Johannesburg, to complete a clean sweep over the visitors.

Chasing a target of 381 runs, Pakistan were dismissed for 273 runs with middle-order batsman Asad Shafiq top-scoring with 65 runs.

Kagiso Rabada and Duanne Olivier claimed three wickets each for the home side.

Resuming at overnight score of 153-3, Pakistan were under pressure right from the outset as Olivier struck twice on consecutive deliveries — dismissing Babar Azam and captain Sarfraz Ahmed — to quash any hopes of Pakistan’s unlikely victory.

Lower down the order, Shadab Khan offered some resistance with an unbeaten knock of 47 runs but that only resulted in delaying the inevitable.

Wicketkeeper-batsman Quinton de Kock was declared player of the match for his brilliant century in the second innings.

Pacer Duanne Olivier bagged the award for player of the series for his top-notch performance with the ball throughout the series.

Olivier took 24 wickets in the Test series against Pakistan; the most taken in a series by a South African bowler since Makhaya Ntini (five matches) claimed 25 against England in 2004-05.

Speaking at the post-match presentation ceremony, Pakistan captain Sarfraz was full of praise for the Proteas bowling attack and especially Olivier.

“We lost 3-0, but credit to their bowlers. They bowled really well,” said Sarfraz. “If you see Olivier is one of the best bowlers of this series. He bowled very well and he bowled fast.”

While sharing his thoughts about the positives gained from the series, the Pakistan skipper said: “Shan Masood played really well and also the way Babar showed his class. They were the positives for us.”

On the other hand, South Africa’s stand-in captain Dean Elgar was proud with the way his side performed on the field and was glad to start the year on a high.

“This is right up there and extremely proud of the guys and it’s a good way to start the year,” said Elgar.

Elgar also appreciated the work put in by his bowlers by stating: “We are fortunate to have bowlers who are experienced. They’re awesome to work with.”

With the conclusion of the Test series, the teams will now start preparing for the five-match ODI series — which is scheduled to begin on January 19 in Port Elizabeth.