Master Ghous - the Pied Piper who could not be saved

Master Ghous - the Pied Piper who could not be saved 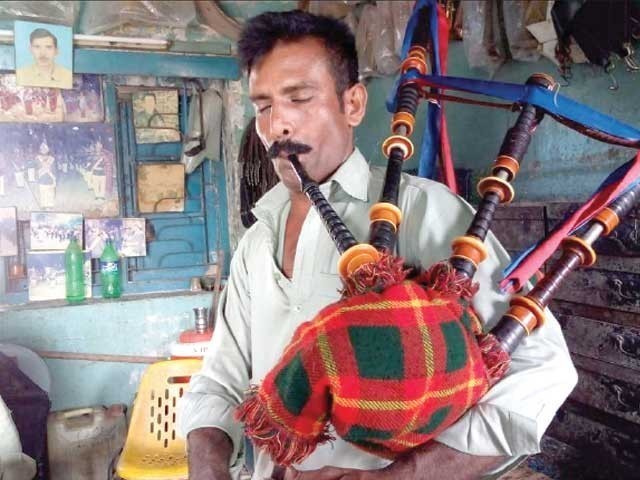 KARACHI  : For decades, Master Ghous Muhammad and his musical troupe brought joy to the lives of thousands of Karachi’s citizens, leading wedding processions and performing at honorary ceremonies. Their melodious tunes were considered the highlight of wedding ceremonies, the band marching ahead of the groom’s entourage, announcing his arrival to the bride’s family.

Today, wedding music bands have been replaced by DJs and choreographed dance routines. Honorary ceremonies no longer require the services of music bands. And Master Muhammad’s musical instruments lie at the bottom of concrete rubble – courtesy of the city-wide anti-encroachment drive.

The latest tragedy occurred when the Karachi Metropolitan Corporation (KMC) razed to the ground around 425 offices and shops built along the peripheral wall of the Karachi Zoo. One of these offices located on the first floor of the KMC Garden Market belonged to Master Muhammad, where he stored all his musical instruments, uniforms and memorabilia from the “good old days”.

With little warning given before the demolition, much of what Master Muhammad held dear was buried under the debris. There were photo albums of his band performing at various wedding ceremonies. There were old letters commending his band and thanking him for his services. And then there was his most prized possession – a portrait of his father, the original bandmaster, which hung on the wall behind his desk.

“The sound of our music that brought so much joy to thousands now lies buried under the rubble,” Master Muhammad laments to The Express Tribune. “We were hardly given any warning.”
What little they could salvage, Master Ahmed’s band members brought to an auto-workshop shop nearby. He now occupies a little corner in the shop, his prized instruments gathering rust amid old car parts.

But the degeneration of traditional music bands started a long time ago. Master Muhammad traces it to the changing trends in wedding parties. At its prime, his band comprised between 10 and 25 members. On days they were engaged in weddings, the band would start practicing early in the morning, then don their starched uniforms and make their way to the venue. “There was a time when the groom and his family would not leave the house without a music band to lead their entourage,” reminisces Master Ghaus. “We were distinguished guests at such parties and people would shower currency notes at us.”

It is difficult to understand him. A traffic accident several years ago severely impaired his speech and restricted his physical movement.
But neither his disability nor the changing times could diminish his love for the craft. He refused to let go and can still play the trumpet and other pipe instrument with flawless zeal. It was his father’s legacy after all.

You see, Master Muhammad grew up with music. His father, a band member of the armed forces, instilled in him a love for the craft from a very tender age. By the time he was six years old, Master Muhammad could expertly play the trumpet. He even mastered the European bagpipe by the time he hit adulthood.

At this point, Master Muhammad joined the police band, where he served several years before resigning and setting up his own business. At the time, business was good. Wedding parties paid good money for the bands to perform and Master Muhammad’s band, the Super Star Band, was one of the premiere troupes of the city. It was during this time that Master Muhammad trained scores of aspiring musicians, some of whom would later join his band. Others joined official bands in Gulf countries. Most got disillusioned and left the profession.

Today, music bands are considered a bad career choice. Even if Master Muhammad does get an invitation, he struggles to gather band members willing to perform on short notice and for the little money on offer.

“I sometimes get an order once or twice in 10 days,” says Master Muhammad. “The party is willing to pay between Rs5,000 and Rs7,000. With a minimum of eight to 10 members performing, each musician gets to take home between Rs400 to Rs600, after adjusting for transport costs.” Transporting the heavy and delicate musical instruments is also not cheap and may cost up to Rs1,500 for a round-trip.

Having dealt so many blows, Master Muhammad has little hope for the future. “My shop, which was the one place where people knew to find me, has been demolished,” he says. “It was ideally located in the heart of the city and we used to hang our instruments and uniforms outside the shop to attract customers.” Now, rubble remains in its wake.

“With a few blows, they [KMC] destroyed decades of our legacy,” he laments, adding that he has little to offer to his three sons who joined the profession after him.

Government functionaries no longer invite musical bands to ceremonies. Wedding parties are remiss too. With little left to hang on to, Master Muhammad realises he is fighting for a dying cause. “This is who we are. This is part of our tradition, our culture,” he pleads. “If only the government and corporate sector show a little interest, we can revive this industry and ensure the skills are passed onto the next generation.”

Unless that happens soon, Karachi will have lost the likes of Master Muhammad to the new wave of urban “development” and changing tastes.