First 'Hindu' US congresswoman says she will run for president

First 'Hindu' US congresswoman says she will run for president

Tulsi Gabbar­d was born in Americ­an Samoa and was raised in Hawaii­
By AFP
Published: January 12, 2019
Tweet Email 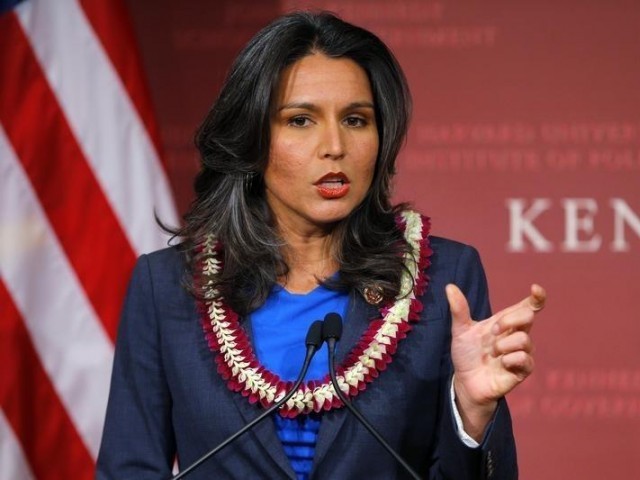 US Representative Tulsi Gabbard (D-HI) speaks after being awarded a Frontier Award during a ceremony at the Kennedy School of Government at Harvard University in Cambridge, Massachusetts. PHOTO: REUTERS

HONOLULU, HAWAII: Democratic congresswoman Tulsi Gabbard, an Iraq war veteran who met dictator Bashar al-Assad in Syria during that country’s devastating civil war, said Friday that she is launching a US presidential bid.

“I have decided to run and will be making a formal announcement within the next week,” Gabbard told CNN.

If elected, the 37-year-old lawmaker would be the youngest president in US history. She is the first Hindu member of Congress and its first Samoan American.

“There are a lot of reasons for me to make this decision. There are a lot of challenges that are facing the American people that I’m concerned about and that I want to help solve,” she said, citing health care access and climate change among them.

Gabbard sits on the House Foreign Affairs Committee, where she is able to influence US foreign policy.

“There is one main issue that is central to the rest, and that is the issue of war and peace,” Gabbard added. “I look forward to being able to get into this and to talk about it in depth when we make our announcement.”

Gabbard was born in American Samoa and was raised in Hawaii, where she is known to surf.

The previous Democratic president, Barack Obama, was also raised in Hawaii, and is the only president who was born in the island state.

Gabbard’s announcement comes ahead of what is expected to be a wave of high-profile candidates throwing their hats in the ring.

Senator Elizabeth Warren has formed an exploratory committee for a presidential bid, and last week took a high-profile trip to the early voting state of Iowa.

Julian Castro, a former mayor of San Antonio who served in Barack Obama’s cabinet as housing secretary, says he will announce his 2020 plans on Saturday.

Gabbard drew heavy criticism when she met secretly with Assad in Damascus in 2017 during a fact-finding mission that also took her to the decimated city of Aleppo. She also met with refugees and Syrian opposition leaders.

“Originally, I had no intention of meeting with Assad, but when given the opportunity, I felt it was important to take it,” Gabbard said when her trip became public.

“I think we should be ready to meet with anyone if there’s a chance it can help bring about an end to this war, which is causing the Syrian people so much suffering.”

Gabbard was deployed to Iraq in 2005, and she maintains her role as a member of the Hawaii National Guard.