ExxonM­obil is drilli­ng some 280km away from coast to find huge oil and gas deposi­ts
By Salman Siddiqui
Published: January 12, 2019
Tweet Email 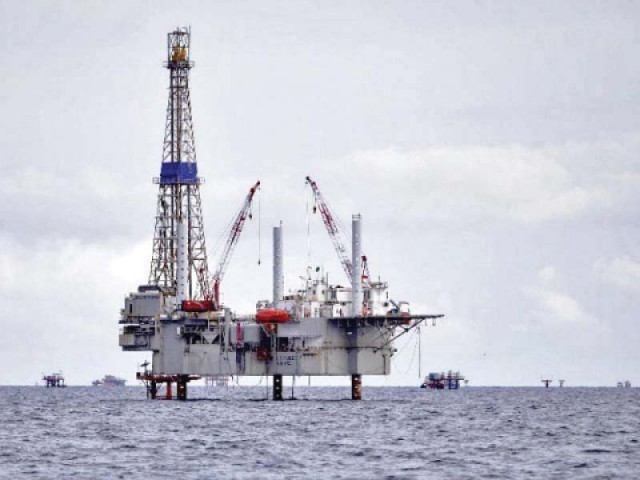 ExxonMobil is drilling Kekra-1 well in Indus-G block, which is located some 280 kilometres away from the Karachi coast. PHOTO: FILE

KARACHI: Pakistan, after a gap of nine years, begins offshore drilling to find estimated huge oil and gas deposits in ultra-deep waters at an estimated cost of over $100 million.

“The drilling is scheduled to commence tonight (Friday),” an official at the ministry of petroleum told The Express Tribune on Friday.

The US firm ExxonMobil, one of the world’s largest oil and gas firms, in collaboration with Italian firm Eni Pakistan Limited, is drilling in ultra-deep waters some 280 kilometres away from Karachi coast.

They are drilling Kekra-1 well in Indus-G block, which is located some 280 kilometres away from the Karachi coast.

They would drill around 5,800 meters deep from the sea level and are targeting to complete the spud in the next 60 days.

For this purpose, ExxonMobil has brought one major drilling ship, three supply vessels and two helicopters on the site.

Eni Pakistan is the operator of the block, while, Exploration and Production Pakistan BV (EEPP) is drilling the well. Besides, Pakistan state-owned Oil and Gas Development Company (OGDC) and Pakistan Petroleum Limited (PPL) are part of the joint venture. Each of the four firms have a 25% participating interest in the block.

The well is being drilled almost after a gap of nine years, as the last exploratory well in offshore area was drilled in January 2010. This is the 18th attempt to find hydrocarbons from deep waters in Pakistan.

“Earlier, Pakistan has drilled 17 times in deep sea. The wells were either found dry or not commercially viable to be operated,” the official said.

Some of the surveyors find the block ‘Indus-G’ similar to Indian offshore Bombay High oilfields, which produces 350,000 barrels per day (bpd) of crude oil, while some define it like wells producing hydrocarbons in the oil and gas rich country, Kuwait in the Gulf.

Pakistan meets around 15-20% of its energy needs through local oil and gas exploration and production, while the rest is met through expensive imports.

The oil and gas imports cost Pakistan around one-fourth of the total import bills per year. The country has emerged as one of the largest gas (liquefied natural gas) importers in the last couple of years at the world level.