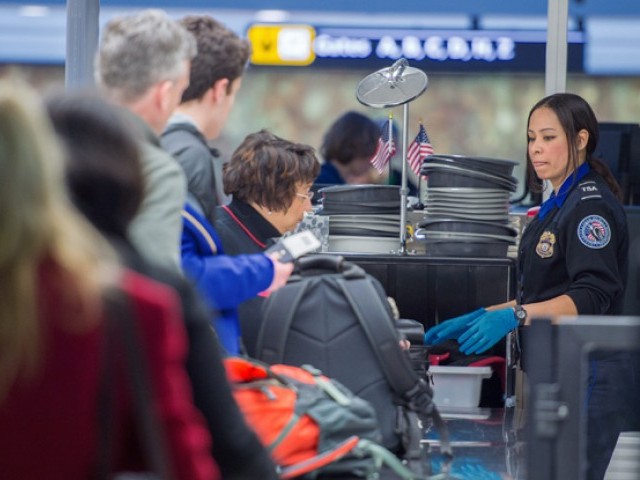 WASHINGTON: The partial shutdown of the US government could have serious consequences for air safety, according to unions representing aviation workers, which are calling for an immediate resolution to the budgetary stalemate.

Some 800,000 federal employees, including those from the Department of Transport and the Department of Homeland Security which handles air safety and oversees screening at airport checkpoints, have been affected since December 22 when the impasse over President Donald Trump’s demand for a southern border wall opposed by Democrats in Congress began.

Those deemed non-essential have been placed on unpaid leave, while others have been forced to continue working without pay.

“This is a matter of safety, security, and economic concern,” said the Association of Flight Attendants, which held a protest in the capital Washington on Thursday along with other aviation sector unions, to demand the resumption of normal services.

Trump storms out of talks on shutdown, bemoans ‘total waste of time’

“Our members and the traveling public are flying within a system that is less safe and secure as long as the shutdown continues,” added the letter to Congress from the union, which represents some 50,000 professionals.

“We know all too well the economic hardship that can result from any loophole in our security and any means for inflicting harm by those who view the United States and its citizens as the enemy,” it added in a reference to the September 11 2001 attacks.

The association noted the airline industry contributes over five per cent of the national GDP and supports 11 million jobs, warning, “As the shutdown continues the entire industry will begin to unravel.

The National Association of Air Traffic Controllers (NACTA) meanwhile slammed the crisis, saying it was making difficult conditions even worse for its 20,000 members.

Federal Aviation Administration Academy in Oklahoma City has been closed as a result of the shutdown and simulator trainings have been disrupted.

No breakthrough in US shutdown talks, Pelosi plans new legislation

“Stopping the hiring and training pipeline will exacerbate the current controller staffing crisis,” warned the association in a statement.

Even before the shutdown, controllers have been working six-day weeks and 10-hour days at many of the country’s busiest airports, NACTA’s president Paul Rinaldi said, adding, “This staffing crisis is negatively affecting the National Airspace System, and the shutdown almost certainly will make a bad situation worse.”

Travelers meanwhile are beginning to worry about long lines, with a spike in the number of Transportation Security Administration agents calling in sick since the end of December.

“Despite providing essential government services, TSA officers are among the lowest paid Federal employees, with many living paycheck-to-paycheck,” Representative Bernie Thompson, the new Chairman of the House Committee on Homeland Security wrote in a recent letter to the TSA leadership.

“It is only reasonable to expect officer call outs and resignations to increase the longer the shutdown lasts, since no employee can be expected to work indefinitely without pay.

The TSA has tried to reassure the public. A statement on its website on Wednesday said 1.74 million passengers were screened across the day, and 99.9 per cent had to wait 30 minutes or less.

“Yesterday, January 9, 2019, TSA experienced a rate of five per cent compared to a 3.6 per cent unscheduled absence rate one year ago on January 9, 2018,” it said, lauding “the more than 51,000 officers across the country (who) remain focused on the mission.”