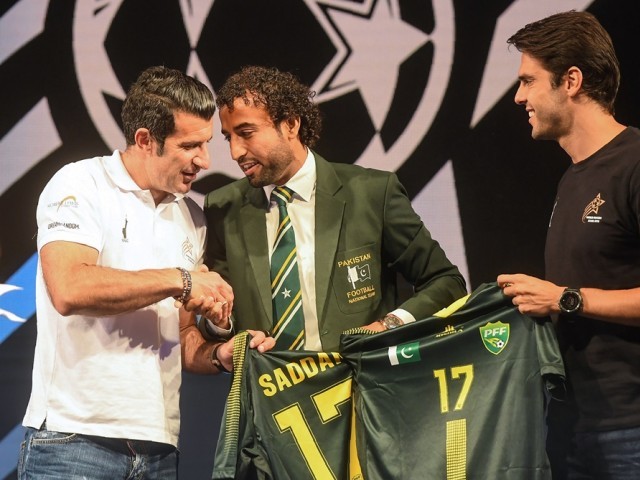 WE’LL BE BACK SOON: The press conference with Figo and Kaka was an event that was more about promotion as TSG's Ahmer Kunwar believes that this is the way to bring authentic international football to Pakistan. PHOTO: AFP

KARACHI: “This was amazing, I’m just happy I got to be on the same stage as them,” Pakistan captain Saddam Hussain remarked as he came back to his seat after hugging football greats Portugal’s Luis Figo and Brazil’s Ricardo Kaka, who promised to come back to Pakistan in April as they launched the TouchSky Group’s (TSG) World Soccer Stars (WSS) event in Karachi at the Pearl Continental hotel on Thursday.

The press conference with Figo and Kaka was an event that was more about promotion as TSG’s Ahmer Kunwar believes that this is the way to bring authentic international football to Pakistan, while hoping to promote the softer image of the country.

But the most poignant moment was about the players, and by that we mean for Pakistani national players, Saddam and midfielder Saadullah, who were sitting in one corner before the event began waiting for Figo and Kaka to take the stage.

In one moment they were fans and in another they saw their idols, where Saddam also got an opportunity to share the stage as one of the local journalists pointed out that the national team’s captain was in the crowd.

“I like Figo, I like Kaka a lot,” Saddam told The Express Tribune. “They are huge players, they are coming to Pakistan, it is a good thing, it can inspire others, but more importantly I would want to see more football for the youth in the country. This was an honour, I’m just happy, I’m grateful. I didn’t know if I will have a chance of being on the stage.”

Meanwhile, Saadullah was sitting quietly, and that felt like he was left out for a bit.

But before that, while waiting, both shared why they like Kaka and Figo.

“Figo is a great players, his stats are amazing, but I really liked Kaka’s style. His game at AC Milan back in the day,” said Saddam, whereas Saadullah feels it was the Brazilian’s pace that was impressive as an attacking midfielder.

On the other hand the event promised that the Figo and Kaka will be coming back to Pakistan to play between April 26 and 29.

“First of all thank you, this is my first time in Pakistan. I know there is great passion for football in the country. We’ll try to help in developing [football] in this part of the country. And do a lot of promotion and come back next April with 10 legends for the World Soccer Stars,” said Figo.

Meanwhile, Kaka added that it is his first trip to Pakistan as well but he is happy to be here. “I have a very good impression of Pakistan and the people here. I am coming back in April.”

The announcement of Figo and Kaka coming to Pakistan was made on January 4, and both stars released messages for Pakistanis through their social media accounts.

The host also made a cheer for a head coach, which could have been confused and was confused for Pakistan national coach Jose Nogueira, who was also mentioned at the event in the passing, but it was for WSS coach Louis Rodriguez. However it is unclear as to who he will be coaching in regards to Pakistan. He is also featured in the brochure given by TSG.

Both players were also open to questions, where Figo said that he would prefer Real Madrid over Barcelona, despite the ire of many Barcelona fans, as he touched his best years with Barcelona and then switched to the rivals.

“I’m a member and supporters of Real Madrid,” said Figo on the question.

Both players were also quick to praise Ronaldo Luis Nazario and Cristiano Ronaldo as one of the journalists raised the question, which one would Figo and Kaka would pick as both have played with both Ronaldos.

“I don’t compare players because of different style, I enjoyed playing with both, I can’t choose one,” said Figo.

Kaka added that he felt blessed to have played with both, with Nazario at Milan and Cristiano in Madrid. “I just feel thankful, these two great players made history in football.”

On another question Figo said that the aspiring talent should keep their eyes on their dream but the opportunities should be provided to the youth, and Kaka said that for now he is working on a football development program in Brazil, but he would like to bring it to Pakistan as well when the time comes.

The international event is the brainchild of a UK-born Pakistani and TSG CEO Kunwar. He said that he wants to build bridges culturally through sports and even music.

The event was hosted by actor Bilal Ashraf, who believes that the event will set to work wonders for Pakistan, both home and abroad.