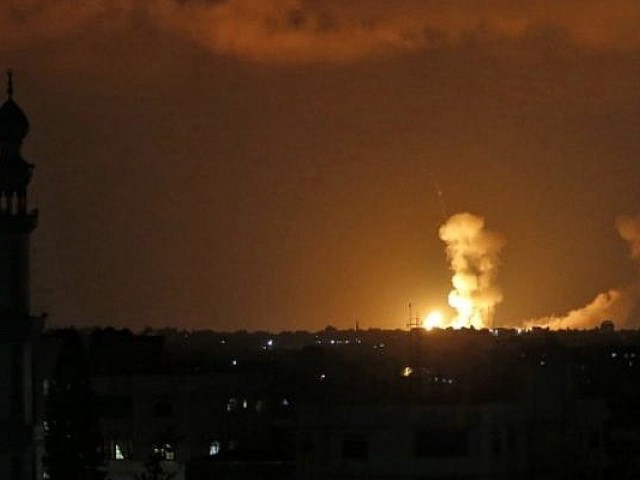 JERUSALEM: The Israeli army said on Monday it had carried out further air raids against Hamas positions in the Gaza Strip in response to a rocket being fired over its border.

The Israeli air defence system intercepted the rocket which was fired overnight from the Hamas-ruled coastal enclave, the army.

Planes and helicopter gunships then raided “terrorist targets at Hamas military camps” on the Gaza Strip, the statement said.

The latest raids follow strikes by the Israeli army on two Hamas posts on Sunday, after balloons carried an explosive device over the border fence.

The Gaza border has been relatively calm in recent weeks after a deal in which Israel allowed Qatar to provide millions of dollars in aid for fuel and salaries in the blockaded enclave.

Following Sunday’s strikes, the Israeli army statement said: “Earlier today, an explosive device attached to multiple balloons was launched on a model airplane from the Gaza Strip into Israeli territory.

A Hamas security source said one strike occurred east of Khan Yunis in the southern Gaza Strip and hit an observation point for Hamas’s armed wing, while the second was east of Gaza City.

The security source said no injuries had been reported.

Israel and Palestinian militants in Gaza, run by Hamas, have fought three wars since 2008.

Since March, protests and clashes have occurred along the Gaza border fence.

Protesters have been calling for Palestinian refugees to be allowed to return to their former homes now inside Israel.

At least 240 Palestinians have been killed since the demonstrations began, most of them by Israeli fire during border clashes but also by air and tank strikes.

Two Israeli soldiers have been killed over the same period, one by a Palestinian sniper and another during an aborted Special Forces operation inside Gaza.