Docume­nt must be pasted on promin­ent locati­on at shops
By Naeem Asghar
Published: December 30, 2018
Tweet Email 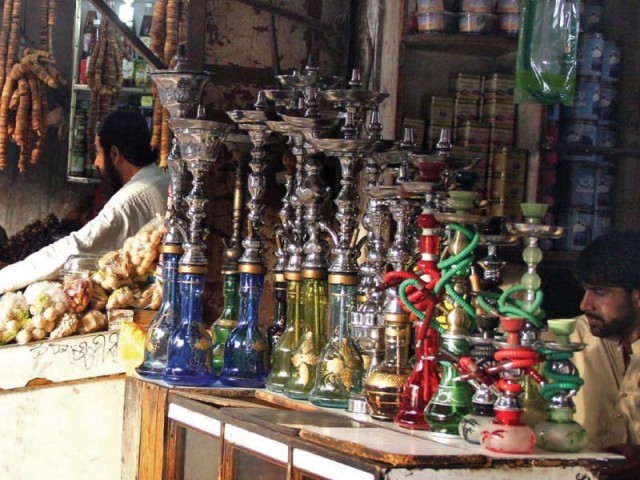 A vendor displays water-pipes and its tobacco to attract customers in Karachi. PHOTO: ONLINE

A ban under the title ‘Tobacco Vendor Act’ has been imposed in the federal capital due to which shopkeepers of Islamabad are now prohibited from selling cigarettes and other tobacco products without a license. Vendors are now required to obtain the licenses from the Excise Department within a month.

According to details, Islamabad administration with the cooperation of the health department’s project tobacco-smoke free Islamabad has imposed the Tobacco-Vendor Act in the federal capital according to which any shopkeeper intending to sell cigarette, tobacco-related products, will need to have a license from the excise and taxation department. The fee of this license will be Rs1,000 to Rs3,000 annually.

Moreover, the kiosks and shops near schools and colleges will be completely banned from selling tobacco products. For the imposition of this Act on Friday, a campaign in Islamabad was initiated in which Excise Department director and Tobacco-Smoke Free Islamabad Project officers distributed licenses among the shopkeepers of Sector I-8.

During this campaign an affidavit is also being signed by the shopkeepers in which shopkeepers vow to continue implementation of smoke-tobacco free Islamabad. The shopkeepers gaining a license will also have to paste a poster at a visible place on which details regarding the negative impacts of tobacco will be inscribed.

The campaign to issue licenses will continue for a month, but after this month legal action will be taken against shopkeepers without licenses and a fine will also be imposed on them. Apart from this there will be a complete ban on selling sheesha, sheesha products, department of excise officers will raid markets, shops and strict action will be taken against those selling drugs or other banned products.