The cultur­al gala that was the Lok Mela was bid adieu on Sunday amid exotic cultur­al and musica­l perfor­mances.
Published: June 13, 2011
Tweet Email 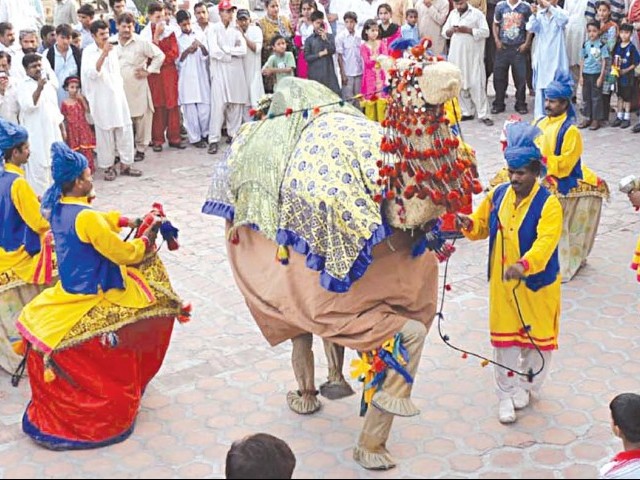 People in a camel suit, along with other performers, dance at the concluding day of Lok Mela. PHOTO: EXPRESS

The cultural gala that was the Lok Mela was bid adieu on Sunday amid exotic cultural and musical performances, attended by a large number of people.

National Commission for Human Development Chairperson Nafeesa Shah attended the closing ceremony as the chief guest and distributed cash awards to the most prominent artists and craftspeople.

In her address, Shah said, “Culture is the path that leads to provincial solidarity which promotes religious harmony, love, peach and brotherhood in the entire nation. We can only maintain our prestige if we remain attached to our culture and traditions.”

The festival featured folk artists and musicians from all four provinces of the country, and Gilgit-Baltistan (G-B) and Azad Jammu and Kashmir (AJK) who presented their indigenous arts and crafts symbolising their respective culture. The craftsmen who were given cash awards include Taj Muhammad Tajal, Muhammad Sharif and Deeba Rana from AJK and Sultana Iqbal and Nijat Bibi from G-B.

Similarly, the artists and performers from Balochistan who were given cash prizes were Shakar Bibi, Aziz Fatima, Muhammad Akram and Muhammad Jan.

People at the closing ceremony termed the festival a “great success” and said such events should take place regularly so that they can enjoy their local culture which is very difficult to do in present days.  “The festival was a true reflection of our magnificent cultural heritage which highlights the fact that we are a creative and peaceful nation and not terrorists as portrayed by a certain segment,” said Aisha Seemab, a visitor at Lok Mela.