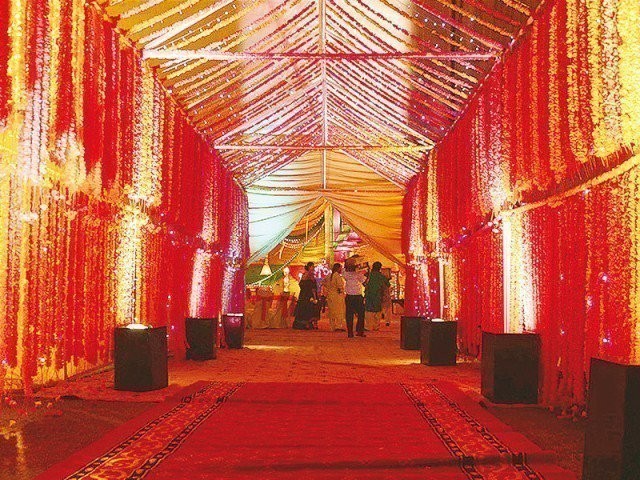 The owners of marriage halls have already been issued warning notices due to not showing seriousness by depositing the sales tax on services to the government. PHOTO: EXPRESS/FILE

PESHAWAR: An inspection of wedding halls in the areas of Old Jamrud Road, University Road, Hayatabad, Faqeer Abad and many other areas of the inner city of Peshawar was carried out on the guidance of Director General KPRA Muhammad Tahir Orakzai.

The team carrying out the inspection was led by the Additional Collector Rashid Javaid Rana.

These marriage halls were reportedly non-compliant towards registration with KPRA and hence had not been paying sales tax on services.

The authority’s enforcement team, while giving a briefing to the director general, told that under the provision of KP Finance Act 2013 and the relevant rules, the owners of these marriage halls have already been issued warning notices due to not showing seriousness by depositing the sales tax on services to the government.

Furthermore, the team informed DG KPRA that in order to create awareness among the respective businesses, proper standees, backdrops and leaflets with tax awareness messages were also distributed among them.

DG Orakzai highlighted that the business entities associated with the provision of services should play their vibrant role in enhancing the revenue and development of the province by cooperating with the authority.