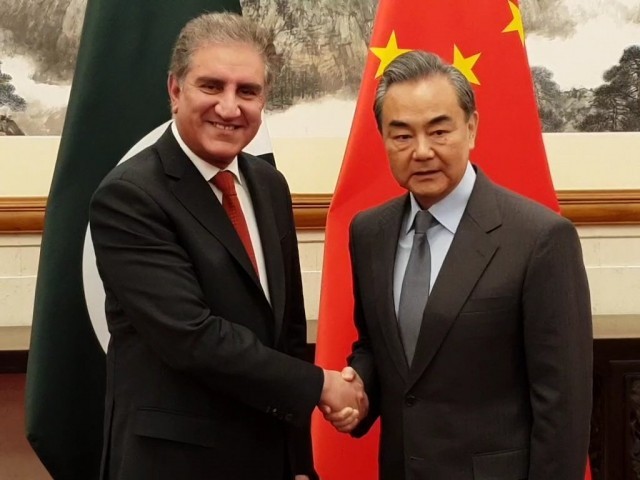 ISLAMABAD: Minister for Foreign Affairs Shah Mehmood Qureshi on Tuesday held extensive talks with his Chinese counterpart Wang Yi on the restoration of peace in Afghanistan.

Pakistan and China reiterated “determination to take a joint course of action for regional peace and stability and to promote connectivity” after Qureshi arrived in Beijing during his ongoing four-nation tour under the government’s policy of outreach in the neighbourhood.

The two sides had an in-depth exchange of views on the entire spectrum of bilateral relations and regional matters, including the situation in Afghanistan.

Qureshi reiterated that the ‘all-weather strategic cooperative partnership’ between Pakistan and China is deeply rooted in mutual trust and respect.

While discussing the evolving political dynamics in Afghanistan, the two sides underscored commonality of views on the matter.

“As neighbouring countries and friends of Afghanistan, Pakistan and China strongly support Afghan-led and Afghan-owned peace process,” he said, appreciating China’s important role in furtherance of peace and development in Afghanistan, particularly through the China-Afghanistan-Pakistan trilateral mechanism.

The minister also discussed “new changes” in the situation in Afghanistan, China’s foreign ministry said, amid plans by the United States to withdraw about half of its 14,000 troops based in the country.

Wang and Qureshi had a “deep discussion about new changes to the situation in Afghanistan and reached a broad consensus”, the Chinese foreign ministry said.

“Both sides believe that military means cannot resolve the Afghanistan issue, and promoting political reconciliation is the only realistic way,” the ministry said in its short statement.

“The two sides welcome the various efforts made by all parties and are willing to maintain close communication and strategic coordination.”

There was no direct mention of the planned US troop drawdown.

The two sides also discussed bilateral ties and regional and global issues. Qureshi pegged the China-Pakistan Economic Corridor (CPEC) to be of “extensive strategic importance for Pakistan and the region”.

CPEC reflects the One Belt, One Road vision of Chinese President Xi Jinping, he said. “Sino-Pak friendship has great appreciation at the public and governmental level.”

He said China attaches paramount importance to its relations with Pakistan and underlined that the time-tested partnership between the two countries is based on mutual respect, trust and strong bonds of friendship.

The foreign minister earlier visited Kabul and Tehran during his four-nation tour.