Things did get a bit awkwar­d, to be honest...
By Entertainment Desk
Published: December 21, 2018
Tweet Email 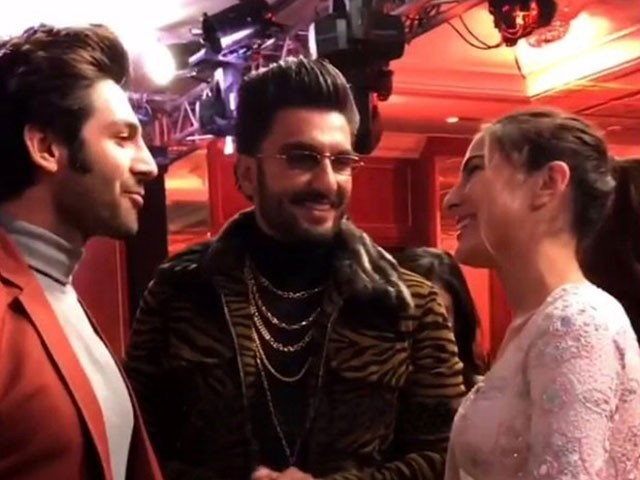 Things got a bit awkward for Sara Ali Khan and Kartik Aryan recently when her Simmba co-star, Ranveer Singh, played  cupid and introduced the budding starlet to the Sonu Ki Titu Ki Sweety actor, who she allegedly has a crush on.

The 23-year-old starlet expressed her desire to date Kartik on Koffee with Karan earlier and Ranveer decided to help her out. In a video that went viral on social media, we see the Sara and Kartik holding hands and Ranveer plastering a mischievous grin. He said, “Glad, you guys have met”, the actor said.

Ranveer Singh introducing Kartik Aryan to Sara Ali Khan , making them two sit together and making hearts while looking at them is so cute . Meanwhile Sara and Kartik are so awkward ,lmaooo

Sara’s statements made headlines and soon after, Kartik was quizzed by many about his response to it. The actor had then said, according to the Indian press, that he would like to work with Sara in a future project.

On the work front, Sara Ali Khan is gearing up for her cop-drama Simmba, directed by Rohit Shetty. On the other hand,  Kartik will be next seen in Lukh Chuppi, alongside Kriti Sanon.

‘Zero’ review: Almost there, but not quite