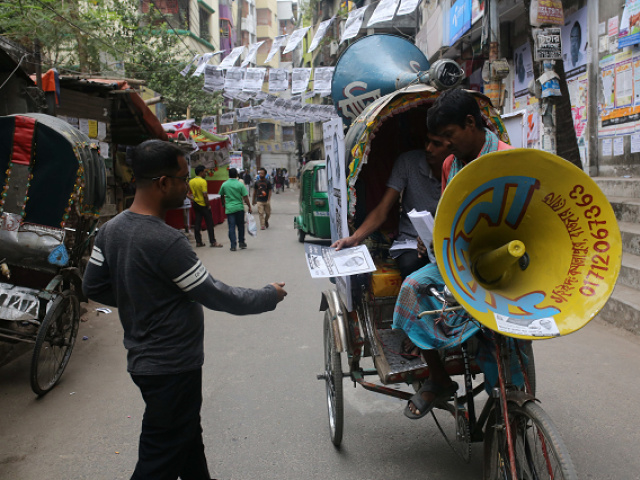 This photo taken on December 16, 2018 shows supporters of the ruling Bangladesh Awami League distributing leaflets to people during the general election campaign in Dhaka. PHOTO: AFP

DHAKA: Subrata Chowdhury, an opposition candidate in the looming Bangladesh election, is too scared to leave his party office as campaign deaths and threats mount.

The Dhaka lawyer should be out on the streets handing out leaflets on meet-and-greets. But he says it is too dangerous while his party insists authorities are doing nothing to protect candidates.

“We were attacked by ruling party men as we tried to hang these posters,” said Chowdhury in his glum headquarters amid stacks of unused flyers and banners.

“The police were just silent spectators, or actively supported them.” 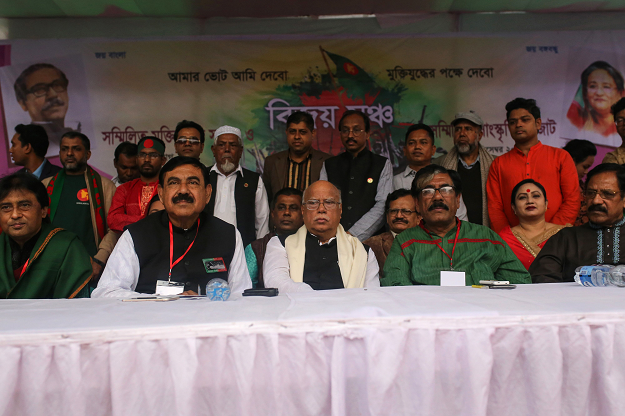 Election authorities have deployed more than 20,000 paramilitary personnel across the country to boost security ahead of the December 30 vote. Army troops are due to join them.

But the BNP is not reassured.

It says at least four party activists have been killed – including one who fell to his death from a Dhaka rooftop last week in suspicious circumstances – and thousands hurt in the past week.

The party claims that 152 out of 300 opposition candidates have been attacked while campaigning and more than 8,700 activists, including 14 candidates, have been detained in the past month.

The opposition says its rallies have been broken up by police firing pellet guns and tear gas, terrifying voters turning out to show solidarity with the beleaguered movement.

Candidates like Chowdhury, trying to boost their visibility, have been threatened on the campaign trail by ruling Awami League followers wielding metal bars.

Two Awami League followers have also been killed in fights with the opposition.

Police have denied interfering in rallies or harassing opposition campaigners and authorities say those detained in recent weeks – which opposition figures say are in the thousands – had outstanding warrants for their arrest.

Obaidul Quader, general secretary of the Awami League, said the party did not tell its workers to attack opponents.

“I won’t say all (the allegations) are false. But… we did not give any order,” he said.

The Election Commission says it has taken steps to ensure a level playing field – despite the overwhelming number of opposition candidates disqualified.

But alarm has been growing as the poll looms.

Rights groups and government critics warn the election is not shaping up to be free or fair in the country of 160 million.

“Members and supporters of the main opposition parties have been arrested, killed, even disappeared, creating an atmosphere of fear and repression that is not consistent with credible elections,” said Brad Adams, Asia director for New York-based Human Rights Watch.

There are fears of a repeat of the one-sided 2014 national election – when the BNP boycotted the vote, letting Hasina walk into office unchallenged.

Since then, Hasina and her party have been accused of drifting toward authoritarianism, silencing dissent and the press by using an onerous digital-security law.

The opposition’s veteran opposition leader Khaleda Zia was handed another stiff jail term in November, ensuring she was kept out of the race.

The browbeating has left voters wondering if there is an alternative to the governing party.

“It’s a one-sided poll so far. The opposition is too afraid to campaign,” said Rezaur Rahman, a voter from West Nakhalpara in the capital Dhaka.

The streets of West Nakhalpara are plastered with images of the incumbent, a ruling party minister whose supporters have staged noisy parades.

His challenger – head of an opposition youth league – remains all but invisible.

“I doubt the opposition is even contesting the polls,” said one shopkeeper, who declined to be name for fear of retribution.

“I haven’t seen any of his posters or leaflets. No one came to me seeking a vote for him.”

Opposition candidates say the odds are stacked against them.

“They claim the people are with them. Then why aren’t they letting everyone campaign freely?” asked BNP candidate Afroza Abbas, whose motorcade was attacked last week.