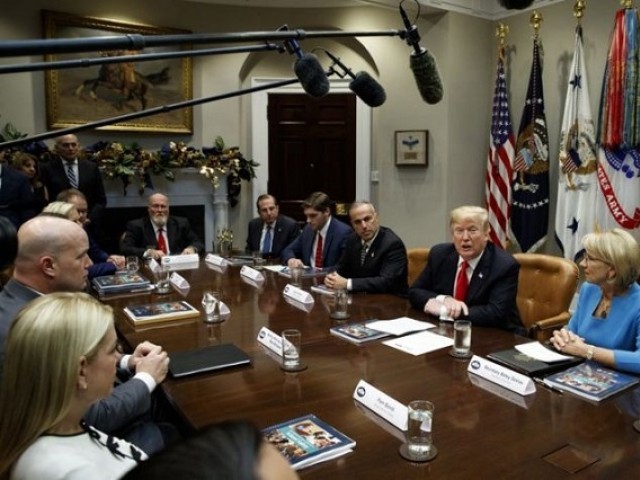 WASHINGTON: A safety panel set up by US President Donald Trump in the wake of numerous school shootings recommended Tuesday that schools consider arming staff, using veterans as guards and reversing Obama-era guidelines.

The commission rejected calls to increase the minimum age required for gun purchases, arguing in its 180-page report that most school shooters obtain their weapons from family members or friends.

Instead, it suggested arming staff – even teachers in some circumstances – “for the sake of effectively and immediately responding to violence.”

School districts where police responses could be slower, such as rural districts, may benefit in particular, the commission said.

The report pushes for a review of disciplinary guidelines introduced in 2014 under former president Barack Obama, which suggested alternatives to suspension and expulsion to tackle discrimination against black and Latino students.

The commission’s report said the measure has had “a strong negative impact on school discipline and safety.”

The American Civil Liberties Union condemned that proposition.
“The Trump administration is exploiting tragedies to justify rolling back school children’s civil rights protections, despite the lack of any evidence linking school discipline reform to school shootings,” it said in a statement.

Democratic Representative Nancy Pelosi, who will be US House speaker when her party take over the chamber in January, criticised the report saying Trump and DeVos “have reached a new low.”

“Their ‘report’ on school safety puts special interests and the NRA ahead of protecting America’s school children. Students & parents have had #Enough,” Pelosi wrote on Twitter.

She drew a backlash from Ryan Petty, a gun enthusiast and school safety advocate whose 14 year old daughter was killed in the Parkland massacre.

“Hi @NancyPelosi, it’s easy to be a critic. Harder to create. Would you sit down with Parkland families to discuss the report?,” Petty wrote on Twitter.

“We worked hard to ensure this report addresses top school safety priorities. It’s painful for us when you dismiss it without basis in fact,” he added.

Over 219,000 US students have been involved in a school shooting since the April 1999 Columbine High School massacre, according to figures collated by the Washington Post.