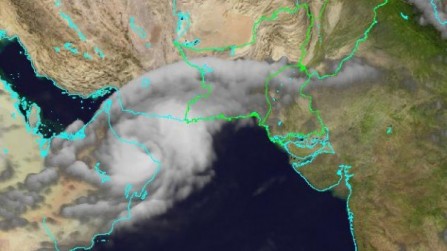 KARACHI: Chairman Pakistan Fisherfolk Forum (PFF) Mohammed Ali Shah said on Friday that about four fishing boats were missing and contact with them could not be made.

He said that all the other missing boats had returned to their respective areas.

Shah said the government was paying lip service as foolproof practical steps are yet to be adopted for safety of the fishermen, their boats and coastline villages.

He said thousands of fishermen are in danger owing to high tides in the seas, adding that emergency measures are required for saving the vulnerable fishermen.

Fisherman in coastal areas of Sindh and Balochistan are at grave danger due to cyclone, he said, complaining that the government had failed to shift the fishermen living in far-flung areas to safe places, adding fishermen of coastal areas including Karachi, Badin, Thatta and Makran are living under the constant fear.

He said that tropical cyclone Phet could hit the coastal areas of the Sindh and Balochistan within next 24 hours, so the administration should take steps on war-footing basis to save the population of coastal areas.

Cyclone not likely to weaken further

Met Office on the same day, said that tropical cyclone PHET may cause urban/flash flooding in Balochistan and Sindh including Karachi when it hits the coastal areas of Balochistan on Friday and Sindh on Saturday evening.

According to the seventh warning by the Met Office, the severe tropical cyclone is not likely to weaken further before approaching Pakistan’s coastal areas.

Estimates suggest the strong possibility of its recurring northeast towards Pakistan coastal areas and the recurring may start this evening.

The cyclone is expected to approach Pakistan’s coastal areas on Saturday evening and make landfall on Sunday (with maximum sustained winds 100-120 km/hour near the centre) with associated storm surge of 4-6 meters.