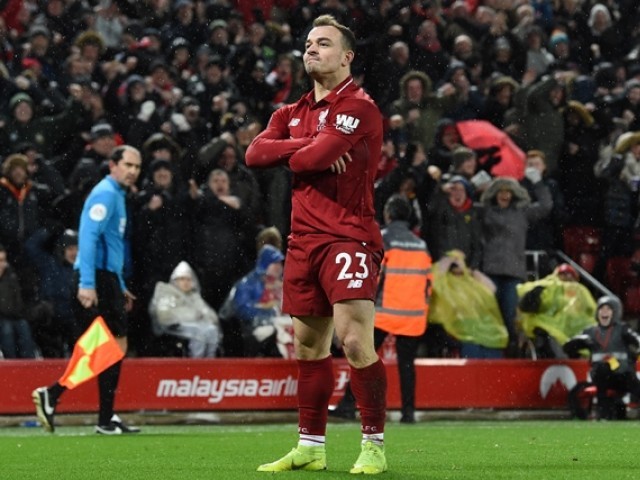 LONDON: Liverpool underlined their determination to win the Premier League title as they blew away bitter rivals Manchester United 3-1 on Sunday.

Manchester City also won 3-1 against Everton on Saturday, but the champions remained in second.

Arsenal’s long unbeaten run came to a shock end, while Eden Hazard thrived as a ‘false nine’ for Chelsea.

Here are five things we learned from the Premier League this weekend:

A month on from losing 3-1 at City, United went down by the same scoreline to their historical rivals with barely a whimper to fall 19 points behind the leaders.

Never after 17 games of a league season have Liverpool enjoyed such an advantage over United and it showed as only an uncharacteristic handling error from Alisson Becker handed the visitors any chance of escaping Anfield with a point.

Xherdan Shaqiri’s two deflected efforts won a game in which United manager Jose Mourinho claimed both sides “played in relation to their qualities”.

It seems the Portuguese believes his players simply are not good enough to compete with the league leaders despite splashing more money on transfers in recent seasons.

To sum up the waste at the heart of United’s troubles, Mourinho left club-record signing Paul Pogba on the bench for the full 90 minutes.

Gabriel Jesus waited four months for a Premier League goal, then got two in 28 minutes as City temporarily moved back to the top of the table.

The Brazilian’s return to form eased concerns over the champions’ lack of a penalty-box predator in the absence of the injured Sergio Aguero, but the Argentine was back on the bench ahead of a busy fortnight with a League Cup quarter-final and four more Premier League games to come, culminating in a top-of-the-table clash with Liverpool on January 3.

Kevin De Bruyne also made his return from a six-week injury layoff, while Guardiola could afford the luxury of starting Raheem Sterling on the bench before he came on to score with his first touch.

At the most physically demanding time of the year in the Premier League, City should reap the rewards of the vast amounts spent in strengthening their squad.

Eden Hazard might not be convinced about his new role as the spearhead of Chelsea’s attack, but the early indications are the Belgian’s positional switch is here to stay.

With Chelsea’s senior strikers Alvaro Morata and Olivier Giroud both struggling for goals this season, Blues boss Maurizio Sarri has deployed Hazard, usually a winger, in a more central role of late.

Hazard started the season so well in his usual midfield role that he was voted Premier League Player of the Month for September.

De Bruyne’s injury woe could be blessing in disguise: Guardiola

But Sarri is determined to stick with the move after Hazard set up Pedro’s opener in the 2-1 win at Brighton and then netted his ninth goal of the season with a fine solo strike.

Unai Emery has warned his Arsenal stars they will not qualify for next season’s Champions League if they continue to drop points against the Premier League’s lesser lights.

Arsenal manager Emery saw his side’s 22-match unbeaten run in all competitions end in a shock 3-2 defeat at struggling Southampton.

The Gunners are three points behind fourth-placed Chelsea and Emery knows Arsenal must defend far more solidly if they are to reach the Champions League at the end of his first season in charge.

“If we won’t win like today, we cannot be in the top four. Other teams usually they are winning,” he said after a sloppy defensive display capped by an error from goalkeeper Bernd Leno for Charlie Austin’s 85th-minute winner.

Mauricio Pochettino backed teenager Oliver Skipp to star for years to come after the midfielder’s impressive first senior start in a 1-0 win against Burnley.

The 18-year-old, who made his Premier League debut against Southampton as a substitute 10 days ago, was thrown into the starting line-up at Wembley after Eric Dier was struck down by appendicitis.

Skipp did not look out of place as he used the ball well, completing 46 successful passes, before being taken off in the final 15 minutes as Tottenham chased a winner that arrived in stoppage-time through Christian Eriksen.

“Fantastic, I think he played like a 30-year-old man,” Tottenham boss Pochettino said.

“So relaxed, trying to play forward. I’m so proud of him.”

PCB to invite Australia for tour of Pakistan once again