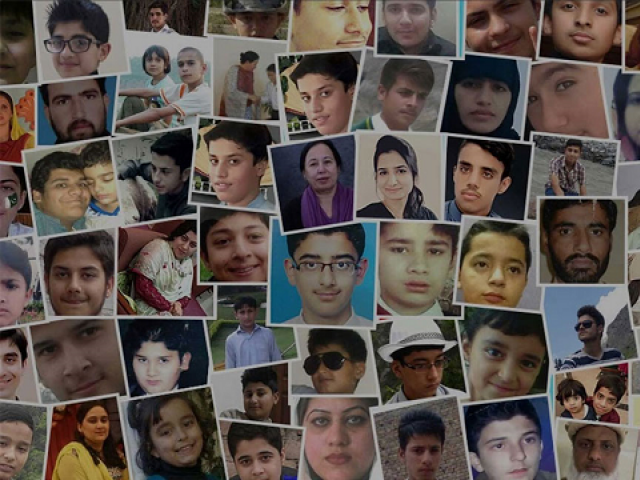 Photographs of the victims of the APS attack, PHOTO: RADIO PAKISTAN

ISLAMABAD: Prime Minister Imran Khan has resolved to turn Pakistan into a society where no form of sectarianism, terrorism on the basis of or against any religion, colour, race and ethnicity shall be tolerated.

The prime minister made these remarks in his message on the fourth anniversary of Army Public School (APS) Peshawar tragedy. He reiterated education is the only weapon with which the nation can defeat extremism and terrorism permanently.

“December 16 reminds us of the black day when terrorists put aside all calls of humanity and religion and targeted innocent children of the APS who had come there for learning and in the hope of a bright future,” said the premier, adding the painful event not only pushed the whole nation into deep sadness but also united it against terrorism

He lauded the valiant armed forces of Pakistan and other law enforcement agencies for accomplishing an unprecedented decisive action against terrorism through the Zarb-e-Azb and Raddul Fassad operations.

“The innocent children sacrificed their lives and united the nation forever against the ruthless enemy who is a blot on humanity and worst manifestation of inhumanity,” he said, adding the nation shall never forget the APS martyrs as he expressed heartfelt sympathies with the grieving families who had sent their innocent children for education and they were martyred.

The prime minister said the nation has paid a price of the war against terror which cannot be estimated.

“Pakistan has sacrificed thousands of lives and suffered immeasurable economic losses and now if someone blames us or holds us responsible we want to clarify that it is our forces and citizens who have paid the biggest price in this battle,” he added.

However, he reiterated that despite all these huge losses and sufferings, as a nation, Pakistan is committed to the national, regional and global peace and will continue making efforts until terrorism is eradicated to its very roots.

Moreover, the prime minster also paid tribute to the gallant armed forces of Pakistan, law enforcement agencies and all those institutions who had sacrificed in the war on terror. He said he salutes these heroes who offered sacrifices in the war against terror.

“The best way to praise our martyrs is to keep resolved for the purpose they sacrificed their lives,” he said concluding his message.

Sacrifices of APS students will always be remembered: K-P CM

“The APS was not only a national tragedy, but also a day to renew the pledge towards the motherland,” said the president in his message on the fourth anniversary of the APS tragedy.

He urged the nation to vow it would be ready for every sacrifice to face extremism in the country while observing the country shall always remember the great sacrifices rendered by the martyrs of APS and the services of our armed forces in the fight against terrorism. The president also prayed for the bereaved families to bear their losses with equanimity.

Paying tribute to the martyrs and bereaved families of the Army Public School attack, DG ISPR Maj Gen Asif Ghafoor said on Twitter that the nation remembers its martyrs. “We stay united & steadfast to carry forward Pakistan to its rightful destination of peace & prosperity,” the statement added.

The APS attack took place on December 16, 2014, when six terrorists stormed the school killing 147 – a figure which included both students and teachers. All six terrorists were later killed by the security forces in a response attack.

Following the tragic APS incident, government mapped out the National Action Plan to eliminate terrorism from the country.

Foreign Minister Shah Mehmood Qureshi also expressed sympathies with the families, friends and loved ones of all the victims in a message. He added that the horrific attack resulted in an immense loss for the nation which continues to remain a scar on the collective memory.