OPEC and some non-OPEC produc­ers decide to cut output by 1.2m bpd for six months from Januar­y
By AFP
Published: December 12, 2018
Tweet Email 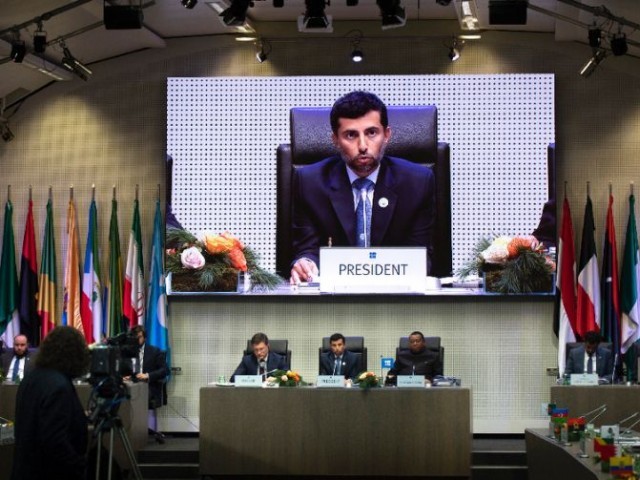 OPEC and some non-OPEC producers decide to cut output by 1.2m bpd for six months from January. PHOTO: ONLINE

DUBAI: Oil producers who agreed last week to trim production to boost prices will meet in April to review the impact and sign a long-term pact, the UAE energy minister said on Wednesday.

Organisation of Petroleum Exporting Countries (OPEC) and some non-OPEC producers decided to cut output by 1.2 million barrels per day for six months from January after world prices shed a quarter of their value in just a few weeks.

Prices currently hover around $60 a barrel, down from more than $85 a barrel in early October in the face of fears of weaker demand and an increase in supplies.

“In April, we will have a meeting to review the decision,” United Arab Emirates Energy Minister Suhail al-Mazrouei told reporters on the sidelines of a conference in Dubai.

Mazrouei said that national oil company ADNOC has already informed clients that it will cut production by 2.5% from January. The UAE, OPEC’s fourth largest producer, has been pumping around three million barrels per day.

He said that the producers decided to meet in April instead of June “to allow us to take the required decision,” before the six months are up.

After 57 years: Qatar to withdraw from OPEC, focus on gas exports

The minister said the cuts will help restore balance to the world market in 2019.

“We expected there will be a slowdown in demand for oil and accordingly decided to cut production,” Mazrouei said.

The producers will also sign a long-term agreement in April to formalise the cooperation between OPEC and non-OPEC parties to the cuts, the minister said.

He said the alliance with Russia and other non-cartel producers has made the OPEC stronger and more effective.

“OPEC is no longer the 30 million barrel (per day) group … With OPEC, non-OPEC including Russia, we are now talking about 50 million barrels or half the world’s production,” Mazrouei remarked.