The Pakist­an Navy is gearin­g itself for any eventu­ality as Cyclon­e Phet has hit the shores of Oman. The cyclon­e is...
Published: June 4, 2010
Tweet Email 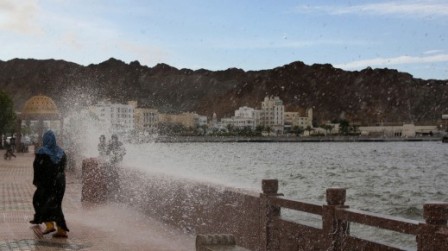 KARACHI: The Pakistan Navy is gearing itself for any eventuality as Cyclone Phet has hit the shores of Oman.

The cyclone is currently about 850 kilometres off the Pakistan coast and is expected to make landfall on Sunday.

The meteorological department downgraded Cyclone Phet to a Category-2 yesterday, adding that the cyclone is expected to become weaker before it hits Pakistan.

Director of the Cyclone Warning Center – Sarfraz Ahmed – said though the cyclone is expected to hit Karachi, it seems unlikely it will hit Gwadar, adding it might cause rains there.

Meanwhile, speaking to Express News, DCO Thatta confirmed that 7,000 poeple residing on the marine belt of Thatta have been evacuated to relief camps in wake of the impending disaster.

The force of Cyclone Phet is reported to have eased and its path has taken a diversion to the right of Masirah, which is an island off the east of Oman.

Officials in Oman said it is now moving eastwards towards the Sharqiyah region.

The cyclone has weakened after the speed of the wind in its center reduced by 30 kilometers per hour, but warnings have not changed.

Coastal communities along the entire eastern seaboard of the Sultunate, extending from Sur to Duqm steeled themselves for the cyclone’s onslaught. The Category 2 storm is packing winds of 140 kilometres per hour at its centre.

It slammed into the Sultanate’s east coast between Masirah Island and Ras al Hadd this morning.