Agricu­lture expert­s said rain brough­t about a positi­ve impact on all Rabi crops and will help boost their sowing­
By Our Correspondent
Published: December 12, 2018
Tweet Email 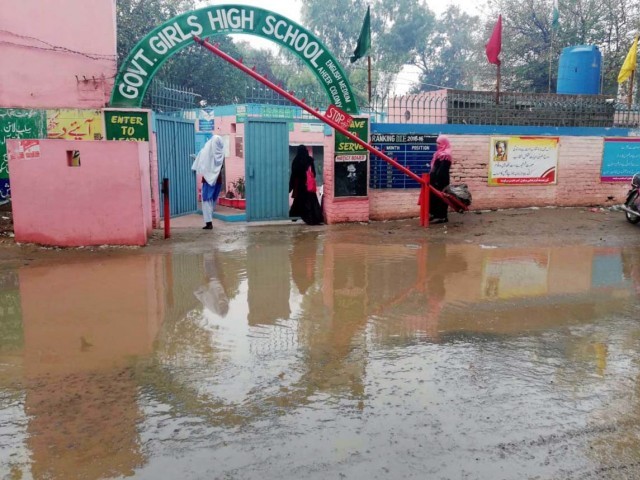 Rainwater accumulated in front of a school in Sargodha. PHOTO: APP

The rain turned the weather cold and significantly decreased temperature.

As a result of the downpour, main roads in different cities were submerged in rainwater, exposing the poor planning of civic bodies. Most of the cities and towns were also without electricity for many hours, adding to people’s miseries.

Agriculture experts said the first spell of rains brought about a positive impact on all Rabi crops, fruit orchards, vegetable farms, pulses and would help boost their sowing.

They maintained it will also help enhance their production during the season. The rains would be most beneficial for wheat, which is a major cash crop of the season and a vital source of staple food to fulfill domestic food requirements, they pointed out.

The experts mentioned that the prevailing smog had a negative impact on the growth and nourishment of all citrus fruits. The rains would be a blessing for all crops and act like a cleansing agent for environment, agriculture and human health. Besides, they said it would help in removing the smog and settling down the dust.

Meanwhile, the Met office officials predicted that more rain was expected in parts of Punjab during the next couple of days. Moreover, dense foggy/smoggy conditions were expected in central and southern areas of Punjab, Met officials said.