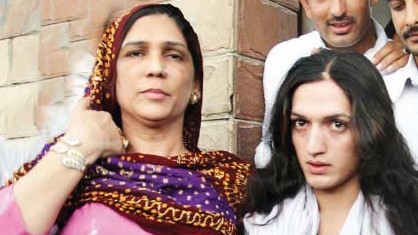 local court granted bail to a transvestite, Rani, and a local, Malik Iqbal, arrested because they were allegedly about to marry.

PESHAWAR: A local court on Thursday granted bail to a transvestite, Rani, and a local, Malik Iqbal, arrested because they were allegedly about to marry.

Police had arrested the couple on May 24 and they had been in police custody since. On Thursday, the court of additional sessions judge Tahir Mahmood granted the pair bail on two sureties bonds worth Rs 100,000 each.

Police had earlier arrested 45 people including 16 transvestites from the alleged wedding party from Dalazak Road.

The 43 people attending the event were set free later by the court, while Rani and Iqbal were sent to central prison on judicial remand. After the bail was granted, Almas Bobby, President of Shemale Rights of Pakistan, along with 30 transvestites staged a demonstration in favour of the judiciary and strongly condemned the police for harassing transvestites.