Pakistan does not deserve 'even a dollar' in US aid: Haley

Pakistan does not deserve 'even a dollar' in US aid: Haley 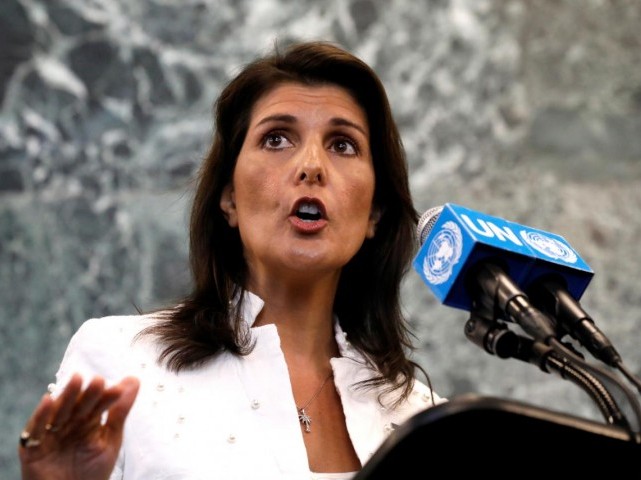 NEW YORK: The outgoing American ambassador to the United Nations Nikki Haley, who is of Indian origin, has accused Pakistan of allegedly harbouring terrorists, saying the US should not give Islamabad “even a dollar” until they correct the situation.

“Giving them over a billion dollars, and they continue to harbour terrorists that turn around and kill our soldiers, that’s never okay,” Ms Haley, who leaves the post at the end of this month, was quoted as saying in an interview with The Atlantic, a monthly magazine, published on Monday.

Haley said the United States should approach foreign aid in a more transactional way, offering it only to countries that show the US goodwill.

“We shouldn’t even give them a dollar until they correct it. Use the billion dollars. That’s not a small amount of change,” she said.

Born as Nimrata Randhawa to Sikh parents, who migrated from Indian Punjab, Haley has since converted to Christianity. She is married to Michael Haley, an officer in the South Carolina Army National Guard. In the past too, she has made anti-Pakistan statements.

“I think we just blindly allow money to keep going without thinking that this is real leverage,” she said.

In a recent interview with The Washington Post, Prime Minister Imran Khan dismissed US’ allegations that there were safe havens for terrorists in Pakistan, saying that the security forces had briefed him on the matter and told him that they had asked Washington “time and time again” to point out where the sanctuaries were.

The prime minister also said that he would never want to have relations with the US where Pakistan is treated like a “hired gun.”