Four others involv­ed in the incide­nt yet to be handed over.
Published: June 10, 2011
Tweet Email 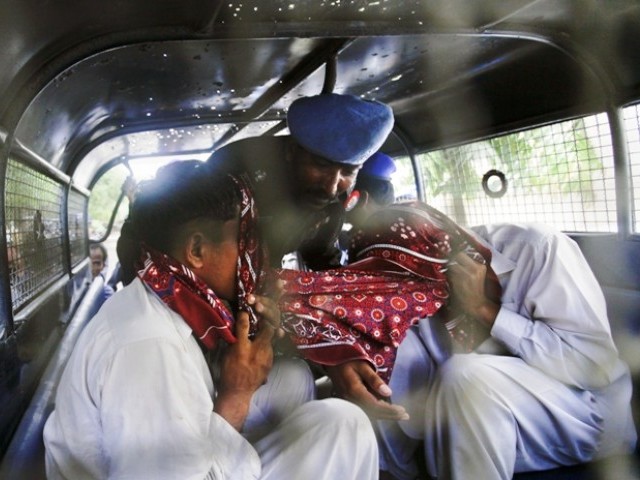 Police load covered men, who they said were paramilitary officials charged in the death of an unarmed man, an incident captured on video, into the back of a police vehicle after they presented before a judge at a courthouse in Karachi on June 10, 2011. PHOTO: REUTERS

KARACHI: Two Rangers personnel, involved in the killing of Sarfaraz Shah, were handed over to the police on a five-day physical remand on Friday.

Express 24/7 correspondent, Ahmed Jung reported that Superintendent of Police (SP) Clifton had said that the two men, Muhammad Afzal and Shahid Zafar, had been handed over to the police on Thursday night. They appeared before Judicial Magistrate, Nadeem Badar Kazi at 9:30am today and were sent on a five-day physical remand.

The two Rangers personnel had been over the police after advisor to the PM, Mustafa Nawaz Khokhar had held talks with DG Rangers and other officials in Karachi.

Shah was shot at point blank range in a public park in an incident filmed live and broadcast on television on Wednesday. Footage of the incident, filmed by an Awaaz TV cameraman, was broadcast repeatedly on local television stations.