His tweet comes after an Octobe­r announ­cement to leave a Cold War deal with Russia to cut missil­e number­s
By AFP
Published: December 4, 2018
Tweet Email 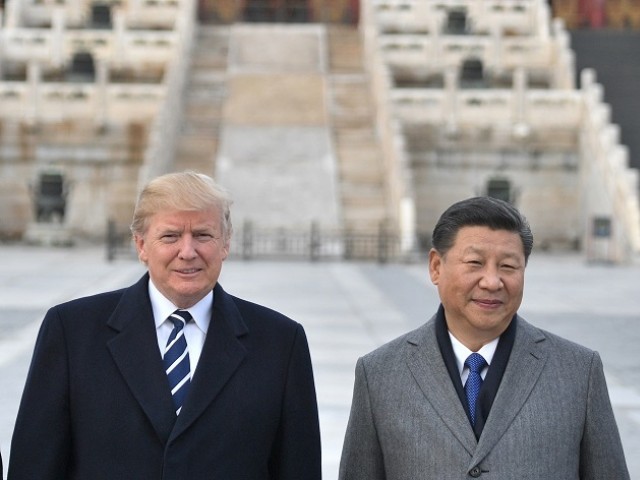 US President Donald Trump, and Chinese President Xi Jinping pose at the Forbidden City in Beijing in November 2017. PHOTO:AFP

WASHINGTON: US President Donald Trump on Monday proposed talks with the leaders of China and Russia aimed at halting what he described as an “uncontrollable” arms race.

Trump’s comment follows an October announcement in which he said he would withdraw from the Intermediate-Range Nuclear Forces Treaty (INF), a Cold War deal with Russia to cut missile numbers.

Critics say the move, which has not been finalized, would spark a new arms race with Russia. Trump at the time said he would build up America’s nuclear stockpile “until people come to their senses.”

In an early morning tweet Monday, the president said: “I am certain that, at some time in the future, President Xi and I, together with President Putin of Russia, will start talking about a meaningful halt to what has become a major and uncontrollable Arms Race.”

Trump’s tweet came on the heels of a weekend meeting with Xi during the G20 summit in Argentina, during which the leaders called a truce on an intensifying trade war between their two powerhouse countries.

The 1987 INF deal did not cover China and was designed to eliminate short- and intermediate-range missiles on Europe’s doorstep.

A date for the US official withdrawal from the treaty has yet to be pinpointed, leaving room for a possible fix that would likely also have to involve China.

Trump’s decision to withdraw from the INF raised global concerns, and administration officials have been engaged in an aggressive public relations campaign with European leaders and the press to explain the move.

They say it is necessary because Russia has long been violating the INF.

Trump and Putin had initially been expected to have formal talks at the G20 summit, where the INF was likely to have been a topic of discussion.

But Trump pulled the plug last week after the Russian navy seized three Ukrainian vessels and their crews in the Kerch Strait. The two did have an “informal” conversation at the summit.

“We were waiting for the meeting between Putin and Trump, who could have together discussed the process… and sketched a rough outline for a dialogue on this topic,” Kremlin spokesman Dmitry Peskov said in comments reported by Russian news agencies.

“But unfortunately, as you know, this meeting did not take place.”
Trump’s reference to the Defense Department’s “crazy” $716 billion budget underscores something of an about-face for the president.

He came into office last year repeatedly saying the vast US military is suffering massive shortages and vowed a “great rebuilding” of the armed services.

Republicans and military leaders had for years bemoaned Obama-era cuts they said went too far and hurt US capabilities, especially in the face of Chinese and Russian military expansions.

Despite a much-touted increase in defense spending this year, Trump now appears to be balking at the price tag and recently told the Pentagon to find five percent in savings, sending service chiefs scrambling to look for areas to cut.

The US spends more on defense annually than do the next seven countries combined.