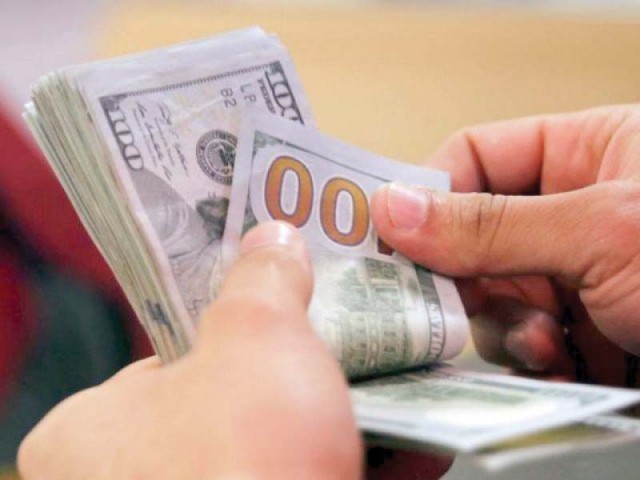 Rupee’s outlook has remained negative since Pakistan engaged in talks with the IMF for a bailout. PHOTO: FILE

KARACHI: The rupee partially recovered the lost ground against the US dollar in the inter-bank market on Monday after Pakistan successfully managed to arrange a “big payment for imports or debt serving” last week.

“The rupee lost ground on Friday as one of the banks arranged a big payment,” said a banker who requested anonymity.

“It would have been an oil import payment, debt repayment or the central bank itself would have purchased dollars to boost the country’s falling foreign currency reserves,” another bank official suggested.

“Most of the time players in the inter-bank market do not exactly know who is selling or buying and for what purposes….the country usually makes oil import payments in the last days of every month,” he said.

They, however, strongly believed that the central bank had intervened in the inter-bank market. The recovery in the rupee was considered artificial and temporary.

The rupee’s outlook remained negative in the short-to-long term since Pakistan had remained in talks with the International Monetary Fund (IMF) for a bailout of $6-12 billion, they said.

As per IMF’s stringent conditions for the bailout, the rupee should be allowed to weaken to Rs145-150 to the greenback.

The officials added that the government was considering options as to what should be the future mechanism for running the inter-bank market; whether it should be a free market where inter-bank players decide the rupee-dollar parity as per dollar demand and supply or the higher authorities should continue to run the market in a controlled manner.

He, however, said the Chinese ambassador’s statement in which he said China would not provide dollars in cash to boost Pakistan’s foreign currency reserves, like the assistance given by Saudi Arabia, was a serious setback to the rupee’s health.

“Despite the development, the rupee has managed to recover. This is a big achievement…however, the rupee’s outlook seems negative,” he said. Pakistan’s foreign currency reserves continued to hover around a four-year low at $8.06 billion. In addition to this, the country needs at least $12 billion in the current fiscal year.