Hope lingers for relatives of 1965 POWs

Hope lingers for relatives of 1965 POWs

Relati­ves of soldie­rs impris­oned by India during the 1965 war are still waitin­g for the return of their loved ones....
By Rustam Satti
Published: June 4, 2010
Tweet Email 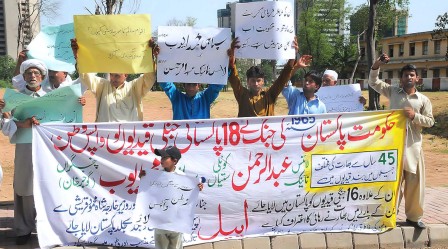 A protest in Islamabad on Thursday by relatives demanding the return of the remaining prisoners of war taken in 1965 by India. PHOTO: EXPRESS

ISLAMABAD: Relatives of soldiers imprisoned by India during the 1965 war are still waiting for the return of their loved ones. Staging a sit-in outside the National Press Club Islamabad on Thursday, these relatives believe that some 18 war prisoners remain alive in Indian jails even after a passage of 45 years.

The brother and nephew of an imprisoned soldier, Muhammad Ayub from Gujar Khan, said he belonged to the Baloch Regiment of Pakistan Army and went missing in 1965 from the Chamb Jorian Sector.

Muhammad Naseer, brother of Lance Naiek Abdul Rehman, said his brother was in the FF Unit of Pakistan Army and went missing from Chamb Jorian Section too.

The protestors said that they had received a letter from the army one month after the war stating that their loved ones had gone missing. Another letter on May 24, 1966 stated that the relatives were martyred.

But one of the recently released prisoner from an Indian jail said on a TV channel five months ago that 18 Pakistani prisoners of 1965 war were in different Indian jails. Upon this, Chief Justice of Pakistan Iftikhar Muhammad Chaudhry had directed the Interior Ministry to gather information about the war prisoners, after which a letter was sent to the Pakistan High Commission in India. The letter received no response. “We sent our case to Senate Standing Committee on Interior but nothing has been done as yet,” one of the protestors said.

The worsening state of Pakistan’s children