No peace until Pakistan turns into a secular state: Indian army chief

No peace until Pakistan turns into a secular state: Indian army chief 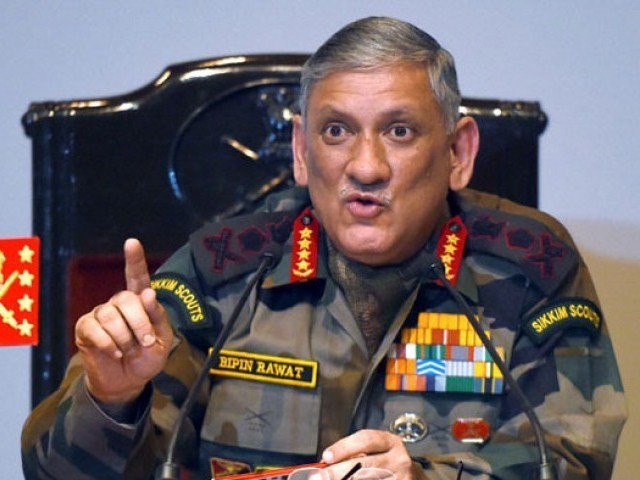 Taking Pakistan-India rivalry to new heights, Indian army chief General Bipin Rawat said on Friday that Pakistan will have to become a secular state to coexist peacefully with India.

The remarks were made only two days after Pakistan extended an olive branch to the neighbouring country by doing groundbreaking of Kartarpur border corridor in a bid to ease Indian pilgrims’ visit to the shrine of Guru Nanak Devji, the founder of the Sikh faith.

Addressing the ceremony, in which along with other guests Indian ministers were also present, Prime Minister Imran Khan had proposed that if France and Germany can live in peace then why India and Pakistan can’t do the same.

General Rawat’s remarks were made while interacting with the local media on the sidelines of a military ceremony in Pune earlier in the day, The Indian Express reported.

“For this idea of countries coming together, Pakistan will have to look at their own internal situation. Pakistan has made itself into an Islamic State. If they have to stay together with India, they will have to become a secular state. We are a secular state. How can we stay together, when they say they are an Islamic State and there is no role for anyone else,” Gen Rawat was quoted by the Indian media outlet as saying.

Peace overtures should not be mistaken as desperation: PM tells India

During Wednesday’s ceremony at Kartarpur, Prime Minister Imran had said the whole Pakistani nation was on one page with regards to improving bilateral ties with India. “We wish to move forward, we want a civilised relationship … I assure you that we can solve this problem. But determination and big dreams are necessary. Imagine, once trade begins, once our relationship is fixed, how much both nations could benefit,” he had said.

“Pakistan’s mindset has changed, but India’s hasn’t,” PM Imran told news reporters from the neighbouring country. He said that there’s no issue that can’t be resolved through talks.

According to him, the opening of Kartarpur corridor was one of the measures taken to improve bilateral ties. “There’s no enmity between the people of the two countries; people to people relations could be improved.”

Suu Kyi to be stripped of freedom of Paris award: mayor’s office