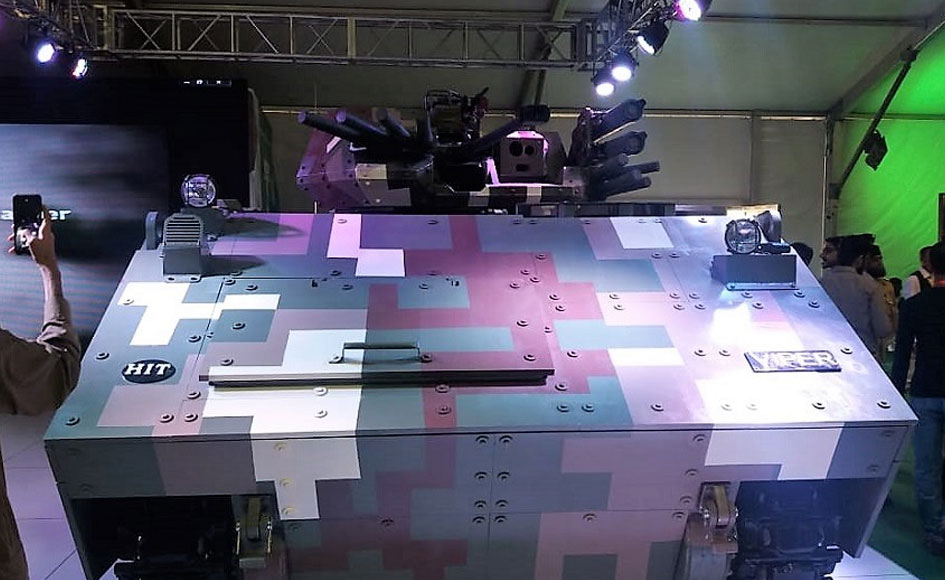 The tenth International Defence Exhibition and Seminar (IDEAS) opened on November 27 in Karachi with major participation from some of the biggest names in the global defence industry.

The highlight of the exhibition though remained weapons produced by domestic manufacturers as they showcased some of the latest systems inducted by the Pakistani armed forces or currently undergoing trials. 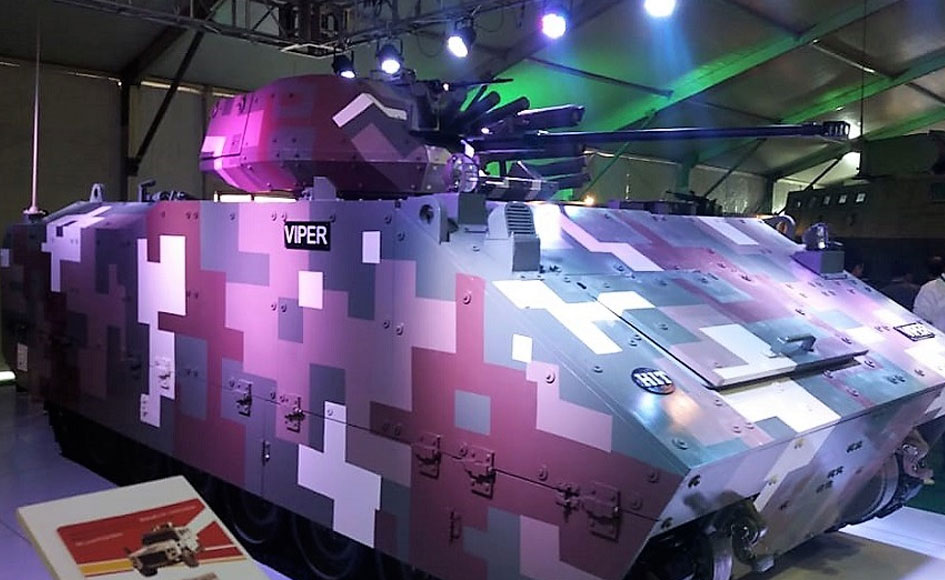 Viper IFV is armed with a 30mm autocannon and Kornet anti-tank guided missiles. -Photo by author

Viper IFV is manned by a three-man crew comprising a driver, gunner and a commander. Capable of transporting nine troops, the IFV can engage all manner of ground targets including main battle tanks. The 30mm gun in the remote-controlled turret can make short work of soft vehicles and infantry while Kornet missiles give the vehicle the ability to engage heavily armoured vehicles from a standoff distance.

HIT has also incorporated multiple protective features in the vehicles. The seats are suspended in order to provide better crew and troop survivability against landmines and improvised explosive devices (IED). 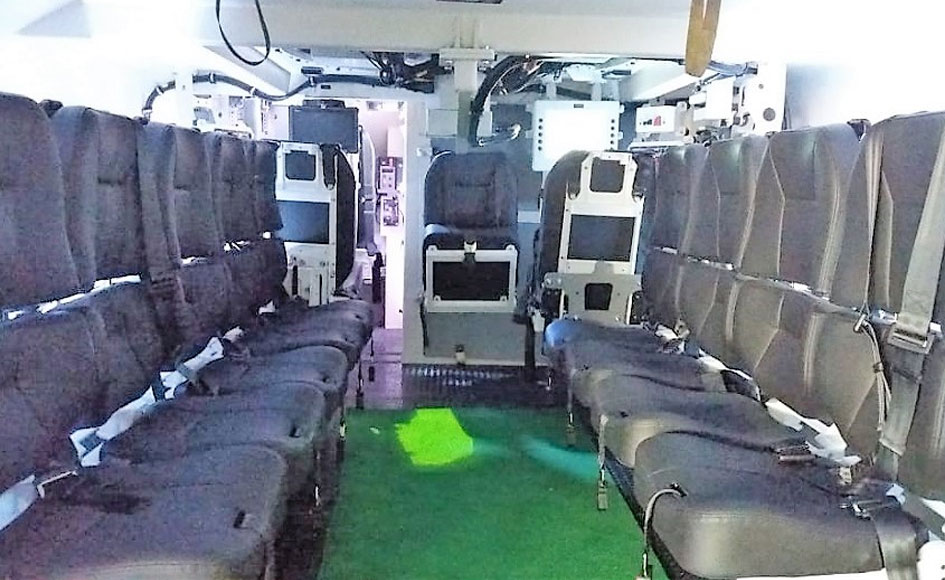 The vehicle has not yet entered serial production and will undergo acceptability trials soon.

The Hamza, developed by HIT and also described as an IFV, is a mine-resistant ambush protected vehicle armed with a similar 30mm autocannon turret as the Viper. 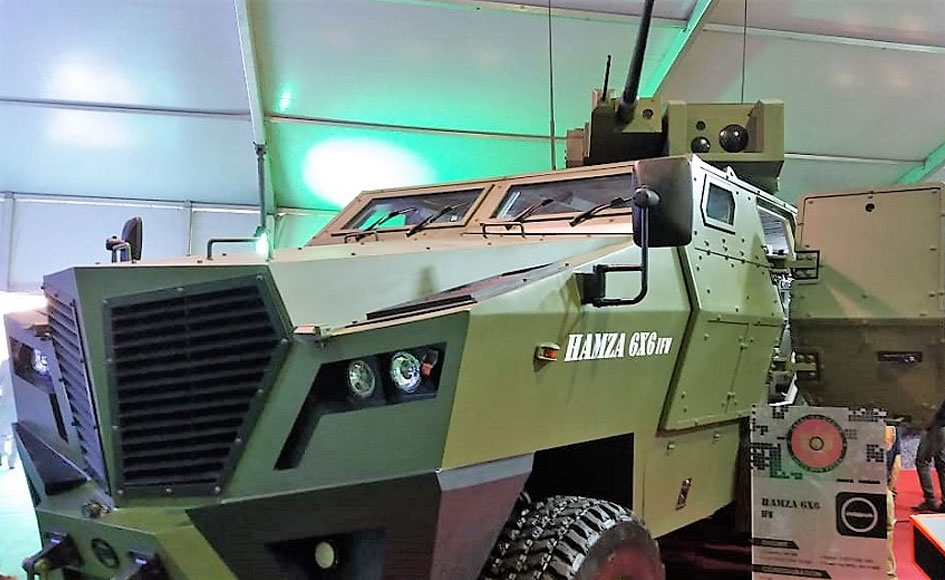 Built on a 6×6 chassis with an optional variant in a 6×4 variant, the vehicle has a cruising range of 500km with a top speed of 110km/h. Hamza can seat nine troops and also has a crew of three.

The high ground clearance of the vehicle ensures crew and troop survivability in an IED-heavy environment. Pakistan’s experience in counter-insurgency warfare shows in the latest offerings by HIT, as the Hamza also comes with suspended seats with headguards to protect troopers from the shock of an explosion either underneath the vehicle or close-by. 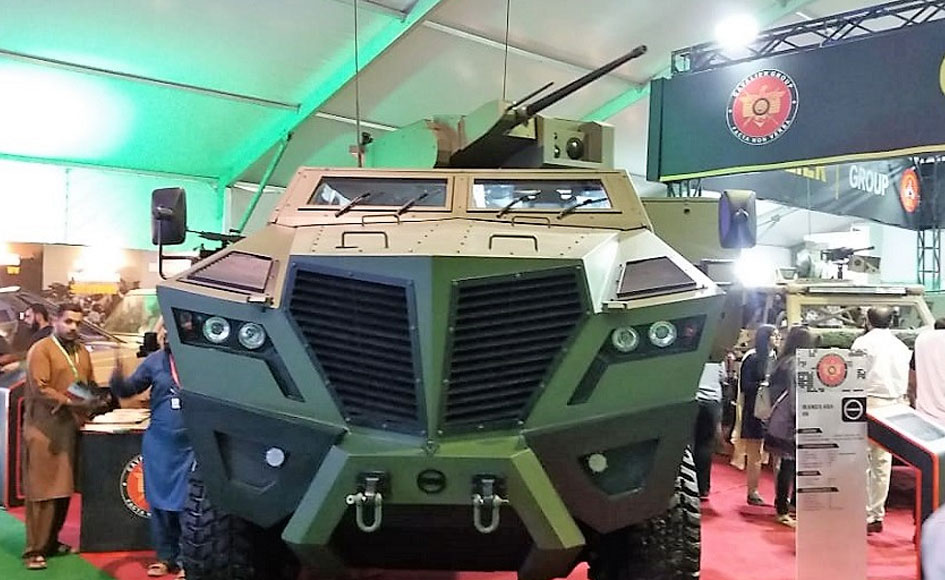 Hamza IFV is armed with a 30mm autocannon. -Photo by author

Hamza, if inducted, will be a capable vehicle in both conventional and counter-insurgency operations.

Local defence firms had three Pakistan-manufactured drones on display at IDEAS 18. The Burraq, Uqaab and the Shahpar are three unmanned aerial vehicles now being produced in the country. 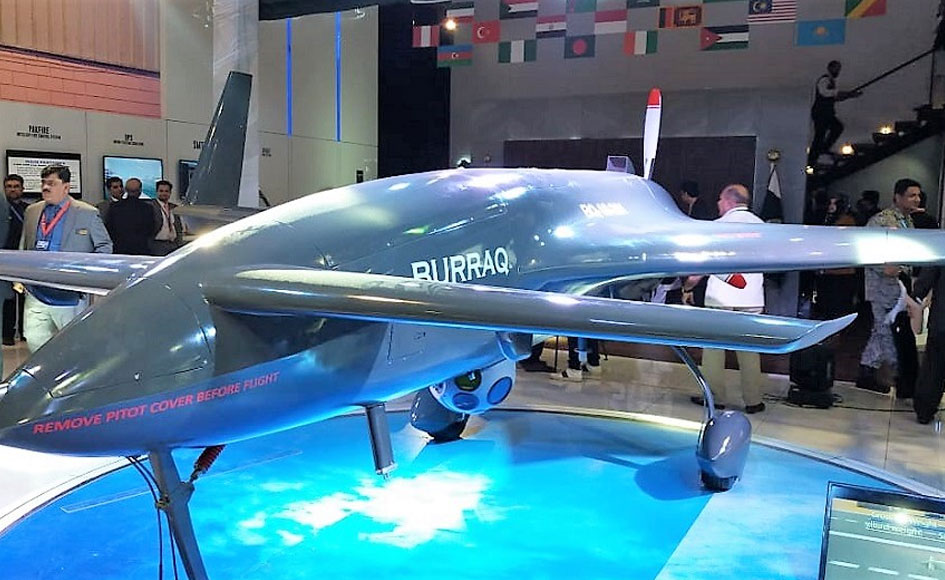 The Burraq is primarily used by the Pakistan Air Force (PAF) and has been used in counter-insurgency operations in the country’s northwest. In 2015 the military’s media wing announced that the drone was capable of precision attacks on ground targets. 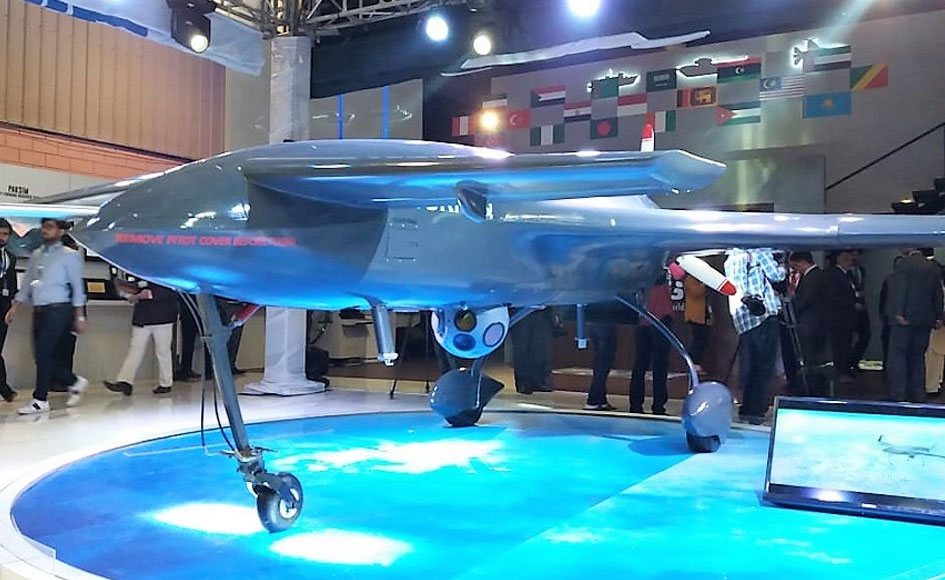 Two other drones, primarily used for reconnaissance are the Uqaab and the Shahpar.

The Shahpar, bigger of the two, has an endurance of around seven hours and a range of 250km. The drone can fly at an altitude of maximum 17,000 feet. 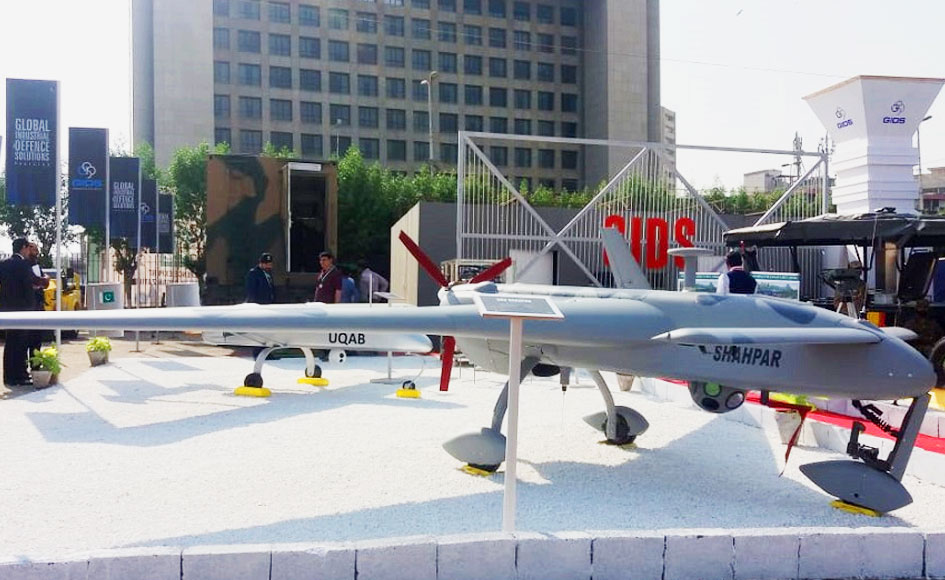 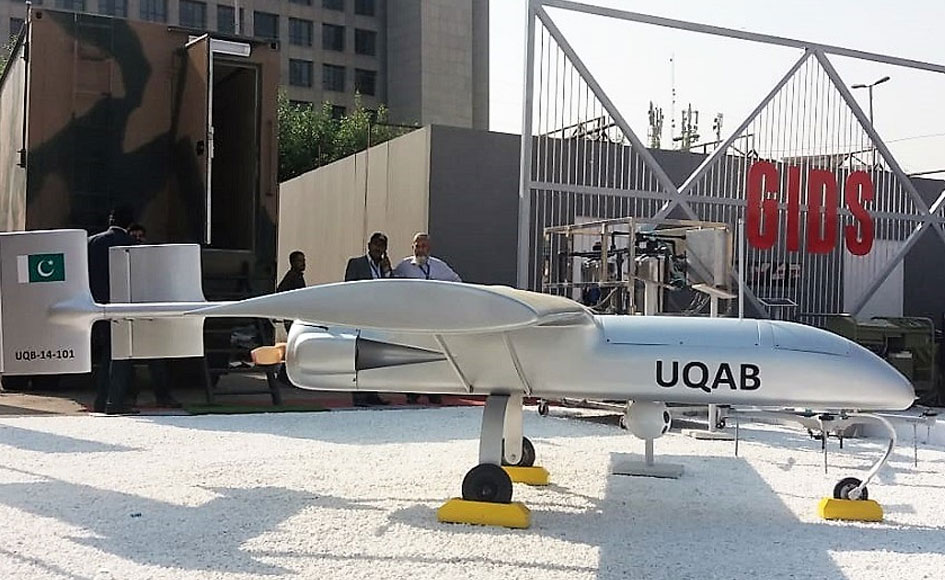 A notable exhibit at IDEAS 2018 was the Chinese SH15 155mm self-propelled howitzer. The gun, reportedly under consideration by the Pakistan Army, has a maximum range of 50km – with rocket-assisted projectiles. 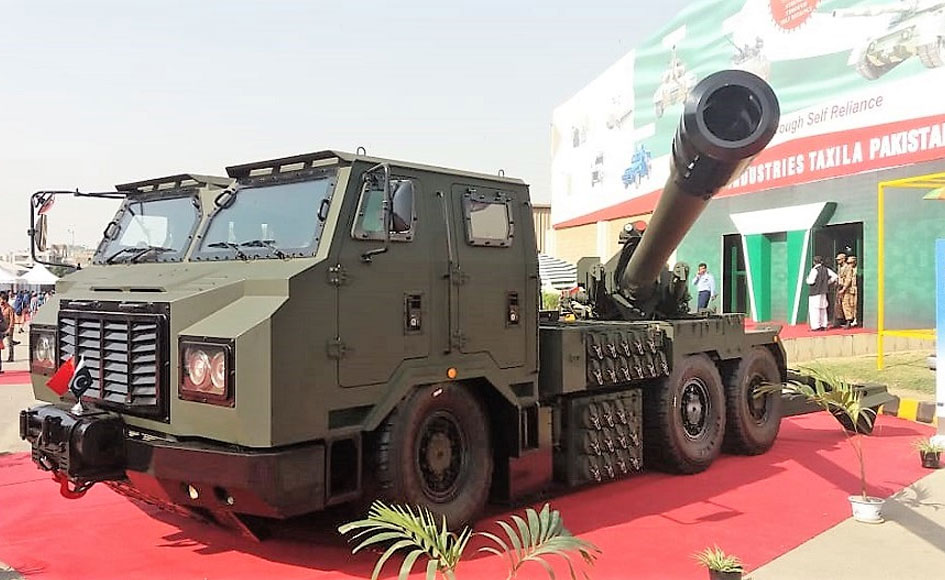 Howitzer is capable lobbing four to six shells per minute. -Photo by author 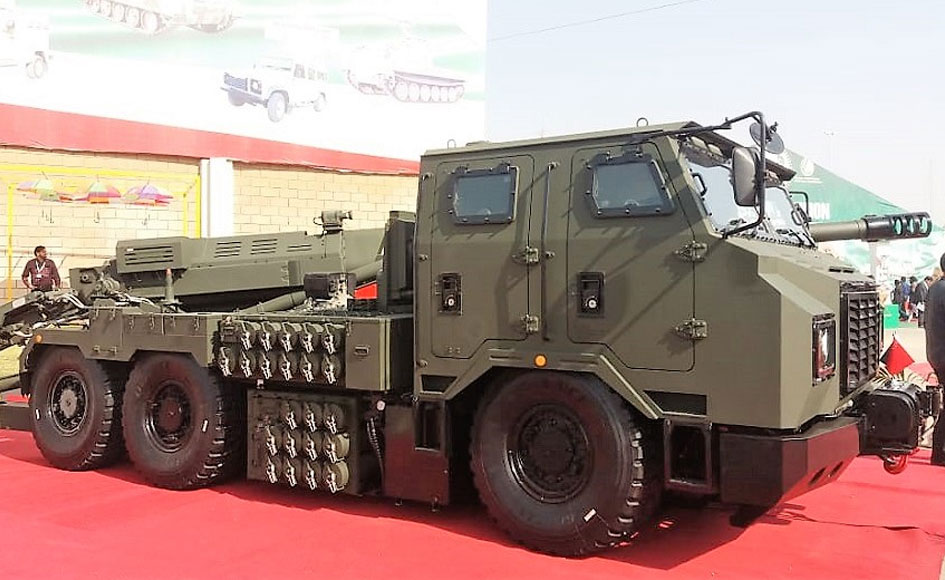 Capable of lobbing four to six shells per minute, the gun if inducted, will neutralise the marginal edge the Indian army has achieved in self-propelled artillery after the induction of the South Korean K9 Thunder. Thus, the Pakistan Army’s Artillery Corps will retain its long-held advantage. 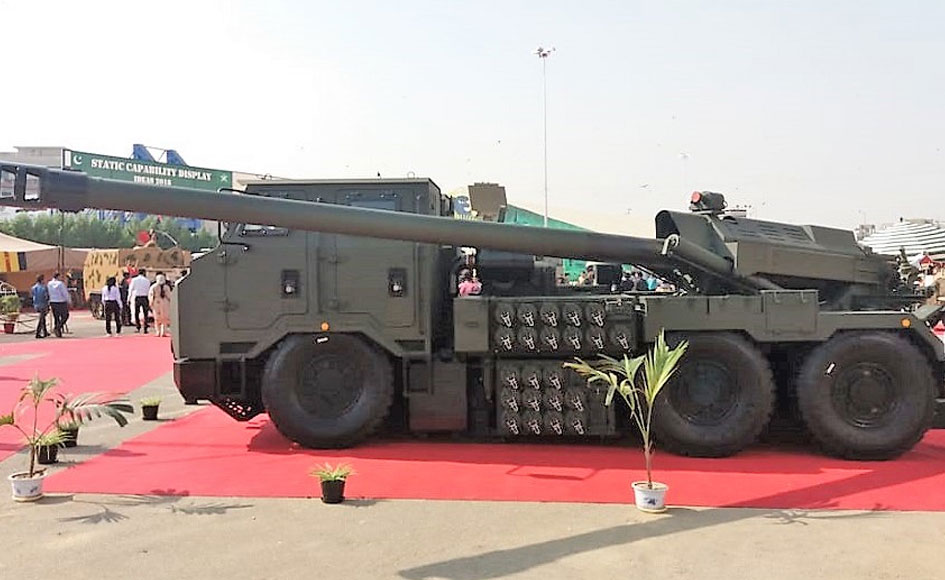 SH15 has a maximum firing range of 50km. -Photo by author

The gun can also fire laser-guided and satellite-guided projectiles and is mounted on a wheeled cross-country platform.