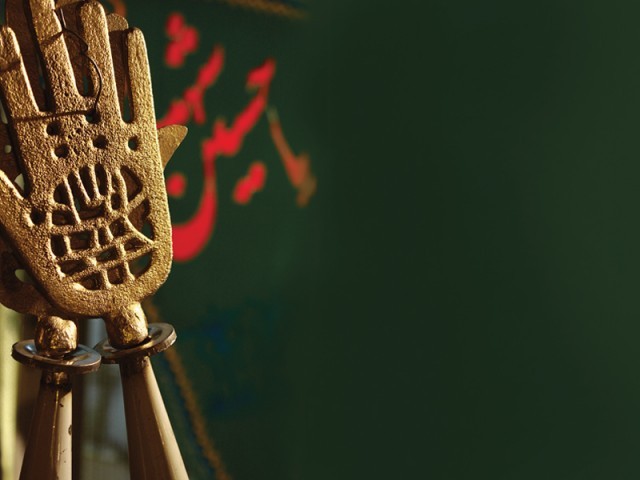 Being a musician doesn’t mean you’ll be making money. Sadly, getting recognised and lauded doesn’t necessarily equal getting paid.

The state of the music industry is so dismal that some musicians have been reduced to playing at weddings and birthday parties just to make ends meet. What other choice is there  when artists do not receive royalties from record label owners, and  can’t perform concerts without getting permission from the label.

But there are some unlikely exceptions to the rule. Some artists not only have a large and loyal market of consumers buying their CDs and cassettes, but are also making  some very healthy profits. Who are these blessed ones? They are the marsia and noha artists of Pakistan. Marsia and nohas are elegies mourning the martyrdom of the Prophet’s (PBUH) grandson at Karabala, an incident that the Shia sect commemorates every year during the month of Muharram.

“It might sound bizarre,” says a music seller, “but Muharram is the month that we all wait for as it guarantees brisk business. We recover the money we have invested in marsia and noha CDs in no time.”

Mohammad Ahsan, a CD shop owner in Rainbow Centre, elaborates further, explaining that business is at its peak during the first week of Muharram. “Like any other CD shop we receive 20,000 to 25,000 copies on the 3rd or 5th of Muharram. By the 7th of Muharram, all of them are sold out. This doesn’t happen with any other artist, local or international … not even Atif Aslam can match the speed of marsia sales!”

When Muharram rolls around, CD sellers in Rainbow Centre, the main supply market for all kinds of CDs and DVDs in Pakistan, stock up with 10,000 to 12,000 noha/marsia CDs — by the end of Muharram all of them are sold out. This  does  not include smaller neighbourhood CD shops that also sell noha/marsia CDs.

“The big names of pop music barely sell, even though we don’t keep a large stock. We keep the pop CDs because they are so nice to look at and some might even sell for a week after their release but not more than that. On the other hand, noha and marsias are a 100% guaranteed business. With Muharram in mind, no one hesitates to buy a Rs40 CD,” says Ahsan.

“Smaller artists like Irfan Haider release their albums at the start of Muharram when mourners are preparing for religious processions and matams so that their albums can sell. On the other hand, someone like Nadeem Sarwar who is more or less the Atif Aslam of the marsia industry in terms of popularity, releases his albums around 7th Muharram and singlehandedly sweeps the market by 9th Muharram,” says Mohammad Imran, the owner of Payal CDs and DVDs. Payal CDs is also responsible for supplying music and marsia albums to smaller shops throughout Karachi.

“Not only is Nadeem Sarwar the king of the noha/marsia industry, he is also the most successful artist of the larger music industry as he sells 200,000-300,000 CDs a year and all of them get sold within the span of two days. This is despite the presence of YouTube and downloadable music; no artists has a better business plan or a more loyal fan following,” says Imran.

However, like any other industry in Pakistan, the marsia industry too can be come unstable when the city spirals into violence. Last year the government sealed most of Saddar a few days before 9th Muharram and shopkeepers had to face serious losses because of that. “The certainty in this business can also backfire. That’s what happened when the government cordoned off Rainbow Center and Saddar; all the shopkeepers, including us, had got so many marsia albums in advance that when the area was sealed off and customers couldn’t buy CDs, we actually suffered a loss instead of making a profit. Those CDs were wasted as no one wants to buy the old albums once the new marsia albums come out,” said a shopkeeper.

People like Nadeem Sarwar might not be as widely known as the musicians on Coke Studio but he is one of the rare artists who are actually still living on record sales and are not reliant on product endorsements or live concerts.