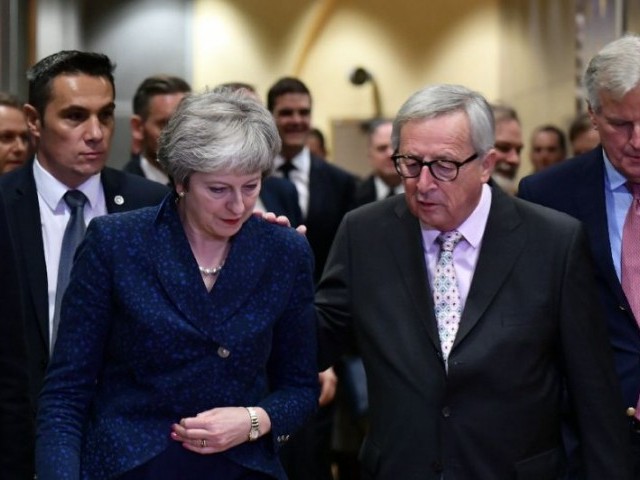 Theresa May met European Commission President Jean-Claude Juncker on the eve of a summit to approve a historic Brexit deal. PHOTO: AFP

BRUSSELS: European Union leaders on Sunday approved a historic Brexit deal with British Prime Minister Theresa May, and together warned rebellious MPs in London this was the best and only option available.

Leaders meeting at a special Brussels summit expressed sadness at the “tragic” end of four decades of British EU membership, but said the terms of the withdrawal were now set.

Juncker emphasised that, after 17 months of gruelling negotiations, “this is the only deal possible”, warning: “Those who think by rejecting the deal, they will have a better deal, will be disappointed.”

The agreement prepares for Britain’s smooth exit on March 29, 2019, and sets out a vision for “as close as possible a partnership ” afterwards.

But May faces a major battle to get the agreement through the House of Commons, with a vote planned for next month.

MPs of all parties — including her own Conservatives — say they will oppose it, with many holding out hope of a better alternative.

“It will certainly not be renegotiated and there will be no further room for manoeuvre,” said Austrian Chancellor Sebastian Kurz, whose country holds the rotating EU presidency.

May herself repeated this, telling reporters in Brussels: “This is the best possible deal, it’s the only possible deal.”

Irish Prime Minister Leo Varadkar said the 27 leaders had made a “conscious decision” not to discuss what might happen if MPs reject the deal.

“There is no plan B,” said Dutch Prime Minister Mark Rutte, adding: “This is the max that we can all do.”

He was among several EU leaders to express their sadness that Britain was now a step closer to leaving the bloc.

“It is tragic that Great Britain is leaving the EU after 45 years.”

Asked if she was also sad, May — who joined the other 27 for closed-door talks after they approved the deal — replied: “No, but I recognise that others do.”

She added: “I am full of optimism about the future.”

It is accompanied by a short political declaration setting out hopes for future ties, including security, trade and migration.

But, until it passes the British and the European parliaments, all sides are still planning for the potentially disastrous possibility that Britain leaves the EU with no new arrangements in place.

European Parliament president Antonio Tajani said a “large majority” of MEPs were in favour of the deal.

But in London, eurosceptic Conservatives and their Northern Irish allies have vowed to reject a deal they says keeps Britain too close to the EU.

DUP leader Arlene Foster said Sunday that if it passed, her party would “review” its support May’s government, instead calling for “a third way, a different way, a better way”.

But May repeated that it her deal delivered on the 2016 referendum vote to leave the EU and said it was “in the national interest for everyone to get behind it”.

“The British people don’t want to spend any more time arguing about Brexit,” she told reporters, adding: “It’s time for our country to move on.”

The summit risked being derailed by a late objection to the deal by Spain over the British territory of Gibraltar.

The impasse was resolved when Britain promised to continue bilateral talks with Madrid after Brexit.

There are also concerns in EU states such as France, Spain, Portugal and the Netherlands over fishing rights once Britain leaves the bloc’s Common Fisheries Policy after the transition, which ends in December 2020.

In an annex to the summit conclusions, the 27 EU leaders says a fishing deal based on “reciprocal access and existing quotas” should be agreed as a priority after Brexit.