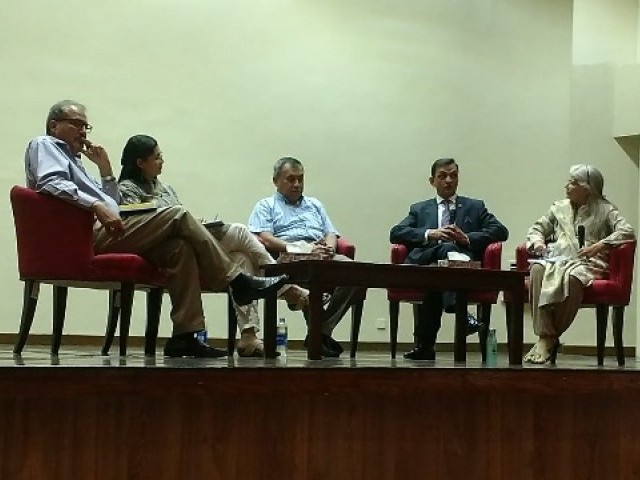 She said this while addressing a panel discussion on ‘Dialogue on Pakistan’s water scarcity in the 21st century’ held at the IBA Main Campus on Thursday. Talks kicked off as hydrologist Dr Hassan Abbas gave a detailed overview of the historical water flow in Pakistan.

He said that historically, water in the region was managed through canals, elaborating that the Mughals were the first to build such inundation canals that harnessed flood waters.

Moderating the panel discussion, journalist and geographer Afia Salam said, “Red rice used to be grown abundantly in the Indus Delta. Now we see that the villages and lands that used to exist have ceased to be because of the intrusion of the sea and decline of freshwater flow to the deltaic region of the Indus river.”

40% of Karachi without water for last 15 days

Also speaking on the occasion, Urban Planner Dr Noman Ahmed pointed out the need to manage water resources in Pakistan’s rapidly urbanising region such as Karachi. “Around 93% of Pakistan’s water resource is utilised by the agriculture sector and the rest is consumed by the urban and business consumers,” he remarked.

He said that the mechanism of water distribution and allocation in Karachi has fallen apart over the years. The intensive utilisation of water has also grown due to rapidly changing urban lifestyle patterns and migration. “We have to revisit the rapidly changing population dynamics of the urban areas, as currently 36% of our country is urbanised but this figure will reach to around 50% in 2050.”

Highlighting the issues concerning water quality, its equitable distribution and the issue of water governance, environmental practitioner Sana Baxamoos, at Hisaar Foundation, claimed that the government institutions are not prepared to address the issue head-on.

“What we see is mismanagement of our water resources due to a failure of governance and leadership. There must be a single institution, for example, Water and Power Development Authority (Wapda), which moves ahead with a policy for water governance, but unfortunately there are a lot of gaps in the current governance of water resources in the country,” she added.

She stressed that the access, equity and distribution of water is a complex issue. “We export water in the form of our crops; the government must revise their “Abiana” (irrigated water tax) and realise the true value of our water resource.”

Adding on the subject of water shortage in the country, Dr Abbas said, “It is really a good time that we see discourse on conserving our water resources. He argued that the narrative that our water is being wasted when it is released into our ocean is simply not true, saying “Indus river basin is the most anthropologically mismanaged river basin in the world with its worst impact seen in the Indus delta.”

He emphasised that the solution was to conserve the country’s water resources and devise a strategy centred on a knowledge-based approach that values science, our culture, history, and the environment.