'Legal right to use a licensed weapon’: PTI's Faisal Vawda responds to criticism

PHOTO: EXPRESS
Federal Minister for Water Resources Faisal Vawda responded to criticism on social media after he was seen carrying a weapon during the Chinese consulate attack in Karachi.

I know all the lifafa journalists also and these social media cowards who can only criticise and sitting like chickens. As Fed min it is my domain to assist Federal agencies. I don’t run away when country needs you. So hell with whosoever has a problem with me being there

I was informed as I was in the vicinity & I further informed the concerned agencies. As a Pakistani I didn’t shy away, it’s my right to use my licensed weapon for self defence. At least I’m not a coward like many hiding behind keyboards and bullshitting.

The minister to Twitter to clarify his stance. In a tweet he said: "I was informed as I was in the vicinity and I further informed the concerned agencies". He further added that "it is a legal right to use a licensed weapon for self-defence".

In the same tweet, Vawda called out social media users "cowards hiding behind keyboards and *****". 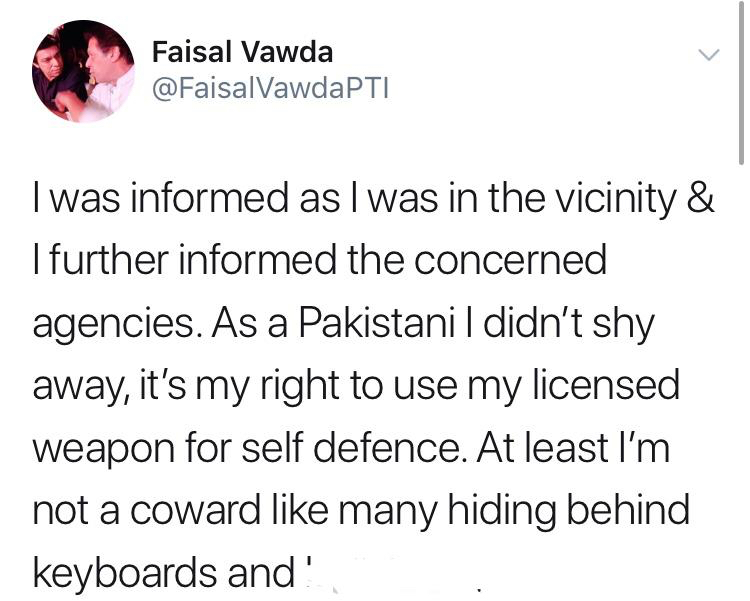 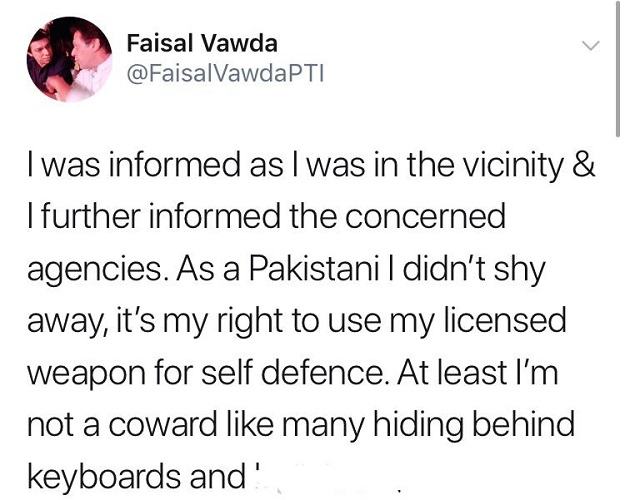 The Pakistan Tehreek-e-Insaf leader continued that he does not run away when his country needs him. "At least I was there from the start till the end. Ask any media reporter present there. Feel sorry for those ducks criticising who are only liability to their parents and country."

Armed men on Friday morning attacked the Chinese consulate situation in the posh Clifton locality of the port city. Two policemen were martyred in an exchange of fire with the terrorists. All three attackers were also killed in the ensuing gunfight with security forces.

All staff members of the foreign mission were reported safe in the attack.

Nikki Khan | 3 years ago | Reply Bravo keep it up let the people shout,they will gain nothing
Replying to X
Saved ! Your comment will be displayed after the approval.
Error !
Error! Invalid Email.