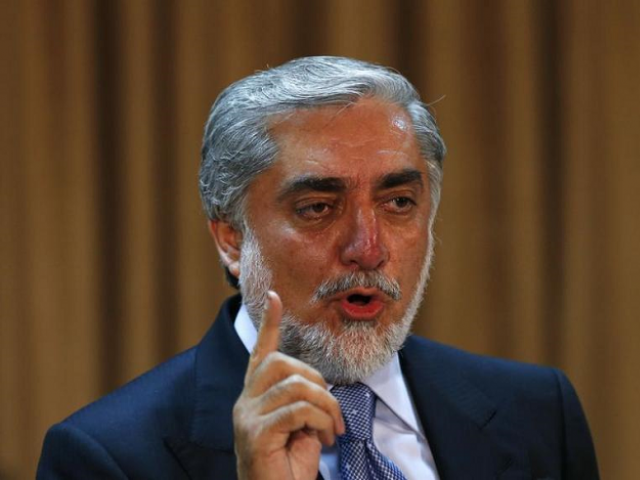 The Taliban have not shown any intention to get seriously engaged in the peace negotiations, says Abdullah. PHOTO: REUTERS

PARIS: The Taliban in Afghanistan have not yet shown any sign they are serious about ending their 17-year insurgency despite US efforts to push a fresh peace process, the country’s de facto prime minister told AFP.

Abdullah Abdullah, who serves as “chief executive” of the unity government in Kabul, struck a far more sceptical tone about the prospects of a deal than his political rival, President Ashraf Ghani, and his Western counterparts.

Ghani said earlier this month it was “not a question of if, but when” an agreement would be reached with the Taliban, while the US envoy to the country even raised the possibility of a breakthrough before presidential elections in April.

“Recently there are renewed efforts in terms of the international community and especially the US,” Abdullah told AFP during a wide-ranging interview in Paris that also covered his own political ambitions.

“We are not judging it too prematurely, but I would say that our experience as of now has been that they (the Taliban) have not shown any intention to get seriously engaged in the peace negotiations,” he added.

The comment on Wednesday came after the latest atrocity targeting civilians in Kabul when a bomber killed 55 people at a banquet hall at a ceremony to mark the birthday of the Holy Prophet Muhammad (PBUH).

I am deeply saddened by the terrorist attack on #Ulema’s gathering to commemorate the birthday of Prophet Mohammad SAW in Kabul. I strongly condemn this coward attack. Our thoughts & prayers are with families of the victims. Today Afghan observes a national day of mourning.

Abdullah, a political veteran of the fight against Soviet forces in the 1980s and Taliban rule in the 90s, called it “beyond comprehension.”
Beleaguered Afghan security forces are also suffering an unprecedented level of casualties across the country where the Taliban and the Islamic State group are stepping up attacks.

Returning to Kabul on Thursday after a three-day trip to France, Abdullah said he expected to be briefed fully about the latest round of talks between US envoy Zalmay Khalilzad and the Taliban, which are believed to have taken place in Qatar last week.

Whatever the outcome, he argued that Afghanistan should hold its presidential election as scheduled next April despite a recent upsurge in violence and suggestions from some that it should be delayed.

“My idea is to stick to the timing, make it work, because it’s part of the system and legitimacy of the system depends on the elections,” he said. “At the same time, continue the efforts on peace with full vigour.”

He downplayed any suggestion of a pre-election breakthrough with the Taliban.

“It will be very surprising if that happens, but should it happen … that would be welcomed by the people of Afghanistan,” he added.

Abdullah has kept up suspense about his own political ambitions after twice running for president in 2009 and 2014 in campaigns that ended bitterly amid accusations of fraud.

After being beaten in 2014 by Ghani, Abdullah agreed to become prime minister of the unity government in a US-brokered deal — but the rivalry between the two men continues.

“I will actively be involved one way or another, but I have not made that final decision,” Abdullah said when asked if he would run in 2019.

Looking ahead to next April’s vote, Abdullah was candid about the lack of progress made in correcting the weaknesses in Afghanistan’s fraud-plagued electoral system.

He said he was ‘disappointed’ by parliamentary elections in October, which were marred by a shambolic rollout of new biometric polling technology and missing or incomplete voter lists.

There were thousands of complaints lodged against the Independent Electoral Commission, although four million voters did defy the security worries to turn out and cast a ballot.

The unity government had pledged to tackle problems that have repeatedly undermined faith in Afghan elections since the US-led invasion in 2001 overthrew the Taliban government in Kabul.

But Abdullah suggested that these efforts, like in other areas, have been hit by the fractious nature of decision-making in the multi-party government.

“It was the commitment of the unity government in 2014… that we will start implementing reforms. We started very late. Why did we do that?” he asked.

Abdullah’s defeats in 2009 and then again in 2014 — when he won the first round but slumped to a surprise defeat in the second — led to political crises which threatened to unravel the country’s fragile political system.

Should observers fear another tainted poll?

“There were a lot of lessons from the parliamentary elections. Should we and other relevant institutions deal with them thoroughly and seriously we can have and we should have better elections than in 2014,” he said.