Any possib­le US sancti­ons on Saudi Arabia would be short-sighte­d, says Jubeir­
By AFP
Published: November 22, 2018
Tweet Email 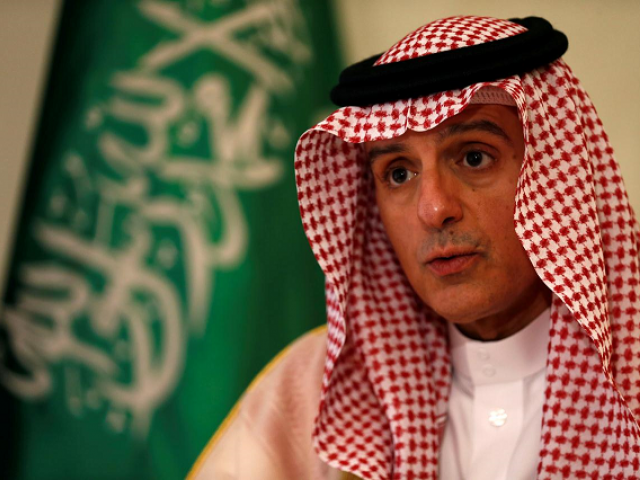 Any possible US sanctions on Saudi Arabia would be short-sighted, says Jubeir. PHOTO: REUTERS

In a BBC television interview, Jubeir said any disparaging discussion about Prince Mohammed or his father, the Saudi monarch, would not be tolerated.

“In Saudi Arabia our leadership is a red line. The custodian of the two holy mosques (King Salman) and the crown prince are a red line,” Jubeir said.

Khashoggi, a US resident who wrote for The Washington Post and had been critical of Prince Mohammed, was lured to the Saudi consulate in Istanbul on October 2, killed and reportedly dismembered.

After lengthy denials, Saudi authorities admitted responsibility and said 21 people had been taken into custody. However, a CIA analysis leaked to the US media went further, reportedly pointing the finger at the crown prince.

Jubeir insisted that Prince Mohammed had not been involved in the killing.

“We have made that very clear. We have investigations ongoing and we will punish the individuals who are responsible for this,” he said.
He called on Turkey to come forward with all its evidence about the slaying and stop leaking out information.

The foreign minister said the murder was a “rogue operation” by intelligence officers.

Jubeir also said any possible US sanctions on Saudi Arabia would be short-sighted.

US will stand by Saudis, even though prince may have had knowledge of killing

US President Donald Trump on Wednesday ignored criticism that he gave Saudi Arabia a free pass on Khashoggi’s murder, instead praising the Islamic kingdom for keeping oil prices low.