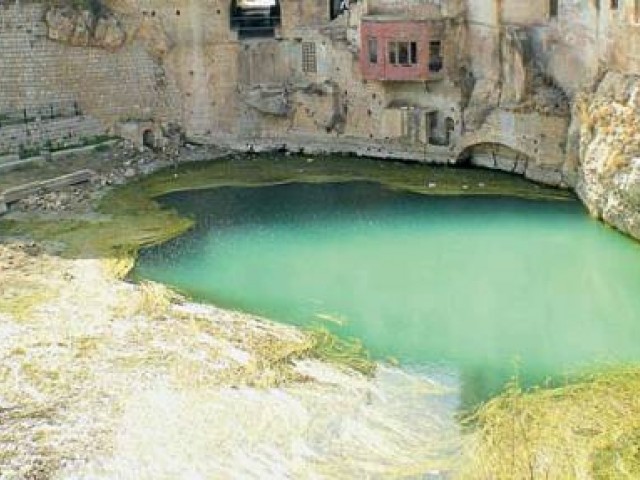 The Supreme Court (SC) on Monday wrapped up the Katas Raj suo motu and ordered a cement company to deposit Rs100 million in the apex court-formed dam fund.

The Katas Raj temple complex is considered sacred by the Hindu community and cement companies in the area were held responsible for drilling boreholes and utilising groundwater, which eventually led to a drop in sub-ground level water and drying up of the pond present at the temple site.

Resuming the hearing at the apex court’s Lahore registry, the court also prohibited the cement companies – DG Khan Cement and Bestway Cement – from extracting groundwater and admonished a DG Khan Cement for stating that the water being used was stored rainwater.

On November 15, the top court formed an inspection committee to probe the veracity of claims by the cement factories.

Once an ‘unfathomable’ pond, always on the verge of overflowing, it had steadily shrunk and visits showed that the pond was all but a small puddle.

Locals blamed the cement plants, which, they said, drilled a number of water-bores in the vicinity of the temple, to draw water for their industrial production.

Dedicated to Hindu god Shiva, the Katas Raj temple complex is situated near Choa Saidan Shah in the Chakwal district of Punjab. The site originally housed a cluster of seven ancient temples, along with a Buddhist stupa and the home of a warrior — built between 6th and 13th century.

Legend has it the pond was formed by the tears shed by Shiva over the death of his wife Sati. Hindu pilgrims from around the world visit the Katas Raj temples during the Maha Shivratri festival and bathe in the ‘sacred pond’ to seek forgiveness. Some believe the water holds healing powers.