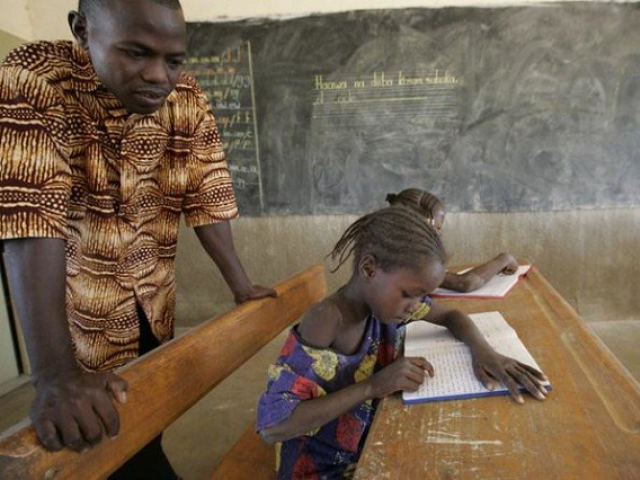 More than three years of assaults and threats by militants have led to the closure of more than 300 schools in the West African nation. PHOTO: AFP

OUAHIGOUYA, BURKINA FASO: In Burkina Faso, a country struggling to contain militant violence, education is one of the victims of the insurgency, with hundreds of schools closed, teachers in hiding and pupils kept indoors over the fear of attacks.

In the conflict-ridden north, more than three years of assaults and threats by militants have led to the closure of more than 300 schools, according to estimates, with the east of the West African nation now also seeing school closures.

“They (the militants) are slowly killing education,” said Kassoum Ouedraogo, who used to teach in a primary school in the small town of Nenebouro, near the border with Mali.

One of his colleagues was murdered in 2016 and last year teachers felt the security threat was so dangerous that they shut the school.

Ouedraogo moved to the northern regional capital Ouahigouya where, he says, he “lives with fear in his stomach”.

“They do not want ‘French’ schools … they want schools in Arabic,” he said, describing how teachers have been threatened by militants angry about “Western-style” education.

“(I used to) stay with villagers so that they could not find me so easily,” Ouedraogo said, who considered the accommodation provided by the school unsafe.

Burkina Faso is part of the vast Sahel region, which has turned into a hotbed of violent extremism and lawlessness since chaos engulfed Libya in 2011, the militant takeover of northern Mali in 2012 and the rise of Boko Haram in northern Nigeria.

Despite international efforts to create a transnational anti-militant military operation, named the G5 Sahel force, the situation is getting worse.

A recent report submitted to the UN Security Council warned that security had “deteriorated rapidly over the last six months” in the area between Burkina Faso, Mali and Niger, with attacks spreading to eastern Burkina Faso.

According to an official report in September, 229 people have been killed in militant attacks in Burkina Faso since 2015 – including three major assaults on the capital Ouagadougou.

Another teacher, who wished to remain anonymous, said militants attacked and destroyed his school.

“One day, armed men arrived in the village. Some students ran to warn me and we went into the bush to hide. The men shot at the doors of the school, then they burned everything inside,” the teacher told AFP, declining even to name the region of the attack.

In the eastern town of Matiakoali, a dozen schools were forced to close at the end of October due to threats of violence, teachers and local security forces said.

Militants had visited mosques in nearby villages and warned that the staff had to leave, a teacher said on condition of anonymity.

“The teachers from neighbouring villages got together and we decided to leave,” he said, explaining that they moved to other cities for safety.

The growing boldness of militant fighters in the former French colony reflects the government’s apparent inability to protect its citizens across vast stretches of the country.

Teachers and unions warn that thousands of children face years without access to schools unless the government steps up the fight against the growing terror.

“The situation is worrying. More than a dozen secondary schools have closed … hundreds of primary schools. There are many places where there are no schools,” said Yssa Kintiga from F-Synter union.

“The state must give itself the means to ensure security so that all children have access to education,” Kintiga added.

In one of the world’s poorest countries that is proving hard to do.

France has a 4,500-member military mission in the Sahel and is backing Burkina Faso and other members of the G5 Sahel group to improve security but it has had funding issues.

The money is seen as essential for easing the conditions which have allowed the militant insurgencies to thrive.

But optimism is hard to find with a French diplomatic source warning of a “very long” anti-terrorist fight.

“People are no longer going to school, the administration has fled,” said Ly Boukary, teacher and member of NGO Balai Citoyen, but added that the situation could improve.