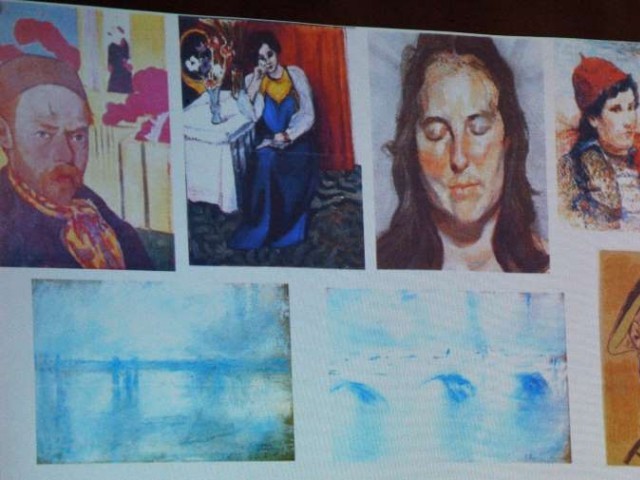 © DANIEL MIHAILESCU/AFP/Getty Images FILE - An image showing stolen paintings from Rotterdam Kunst Museum is presented during a press conference at the National History Museum of Romania in Bucharest. PHOTO AFP

BUCHAREST: One of seven paintings stolen six years ago from a museum in The Netherlands as part of a spectacular art heist may have been found in Romania, the public prosecutor in Bucharest said on Sunday.

Seven masterpieces by Picasso, Monet, Gauguin, and Lucien Freud were stolen from the Kunsthal Museum in Rotterdam in 2012 in a raid that lasted only three minutes.

Dutch media at the time called it “the theft of the century”.

Public prosecutor Augustin Lazar confirmed to AFP that Romanian authorities were in possession of a painting that “might be” one of those stolen from the Kunsthal Museum, adding it needs to be further examined.

Sources told AFP that experts are checking if the canvas is Picasso’s “Harlequin Head”.

Four Romanians were jailed for the heist in 2014, and ordered to pay 18 million euros ($20.5 million at today’s rates) to the paintings’ insurers.

One of the group, Olga Dogaru, told investigators she had burned the paintings in her stove in the sleepy village of Carcaliu in eastern Romania in a bid to protect her son, Radu, when he could not sell them.

She later retracted the statement.

Investigators have previously said the paintings were destroyed after the thieves failed to find a buyer.

The paintings had been on loan to the museum for a show to celebrate its 20th anniversary by the Triton Foundation, set up to look after the art collection amassed by Dutch investor Willem Cordia, who died in 2011.