UK's May defends Brexit deal before critical allies and cabinet

UK's May defends Brexit deal before critical allies and cabinet 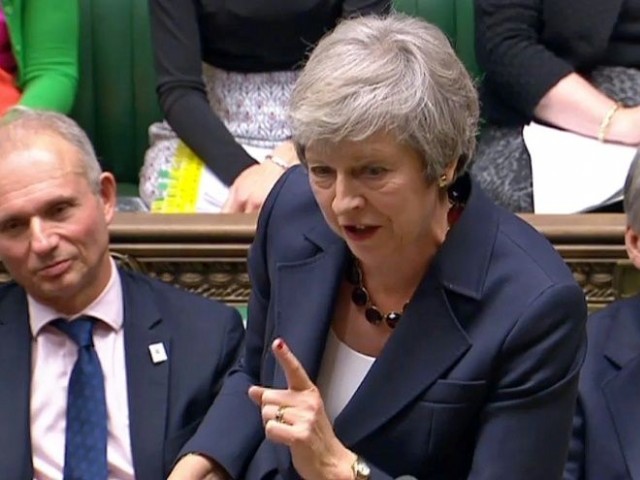 Britain's Prime Minister Theresa May says a draft Brexit deal delivers on the result of the 2016 referendum. PHOTO AFP

LONDON: British Prime Minister Theresa May defended her anguished divorce deal with the European Union before rowdy lawmakers on Wednesday before trying to win the backing of her splintered cabinet.

On one of the biggest days of her political career and with the fate of her government at stake, a determined and composed May told parliament she had secured the best deal possible for Britain.

“What we have been negotiating is a deal that does deliver on the vote of the British people,” she told MPs in her first public comments since EU and UK negotiators finally settled on a draft Tuesday.

The deal “protects jobs, protects the integrity of our United Kingdom and protects the security of people in this country,” May said to jeers.

The framework agreement capped a year and a half of complex and bitter negotiations aimed at unwinding nearly 46 years of British EU membership.

Suffering economic uncertainty in the wake of the global financial crisis and fearing an influx of migrants, Britons voted by a 52-48 margin in June 2016 to regain independence from Brussels.

Should May survive a cabinet session that started later on Wednesday in which ministers were expected to either back the framework deal or quit, Britain and the bloc will hold a Brexit summit on November 25.

Irish Prime Minister Leo Varadkar said the date was agreed pending the UK cabinet’s approval, which will be followed Wednesday by the draft’s publication.

The pound surged following Tuesday’s initial announcement, which came just as the EU stepped up preparations for a potentially catastrophic “no deal” breakup on March 29.

But it has since pared some of those gains as the strength of the resistance to May became apparent — both from those who want a clean break with the bloc and those who want to preserve the alliance.

“This government spent two years negotiating a bad deal that will leave the country in an indefinite half-way house,” he said.

And Conservative Party MP Peter Bone, a leading pro-Brexit lawmaker, accused May of “not delivering the Brexit people voted for”.

“Today you will lose the support of many Conservative MPs and millions of voters,” he warned the British leader.

May has faced constant criticism from Conservative MPs over her approach.

But more ominously, the Northern Irish party which props up her government threatened to break their alliance over reports of a special arrangement for the British province.

According to media reports, the final deal includes a so-called “backstop” arrangement in which the whole United Kingdom will remain in a customs arrangement with the EU.

Northern Ireland would also effectively stay in the European single market under the proposals, meaning some checks may be required between Northern Ireland and the rest of the country, the reports said.

Arlene Foster, leader of the Democratic Unionist Party (DUP), was heading to London on Wednesday, telling Sky News that these were “worrying times.”

“We cannot be separated from the rest of the UK, either in terms of customs or indeed in terms of regulatory alignment either,” she said.

“Hopefully we’ll actually get to see the text so that we can make our own judgement on that.”

European sources in Brussels told AFP that if May wins the backing of her cabinet, Wednesday’s simultaneous meeting of EU ambassadors could be followed by a second get-together on Friday and a pre-summit meeting of EU ministers on Monday.

Failure would delay the final settlement until a formal Brussels summit in mid-December, leaving little time for May to get the deal and associated legislation through parliament.

The talks were stuck for months on how to avoid border checks between British Northern Ireland and EU member Ireland, if and until London strikes a new trade deal with Brussels.

The deal reportedly allows for a review mechanism that Britain could use to try to leave the backstop arrangement — a key demand of Conservative eurosceptics.

Former Tory party leader William Hague warned Brexiteers that they could sabotage the whole process if they failed to back May’s plan.

“If they vote down a deal because they are not happy with the details, the consequences may be that Brexit never happens,” he said on the radio.

Popular tabloid The Daily Mail carried the front-page headline “Judgment Day”, urging its centre-right readership to give the deal “a fair chance”.