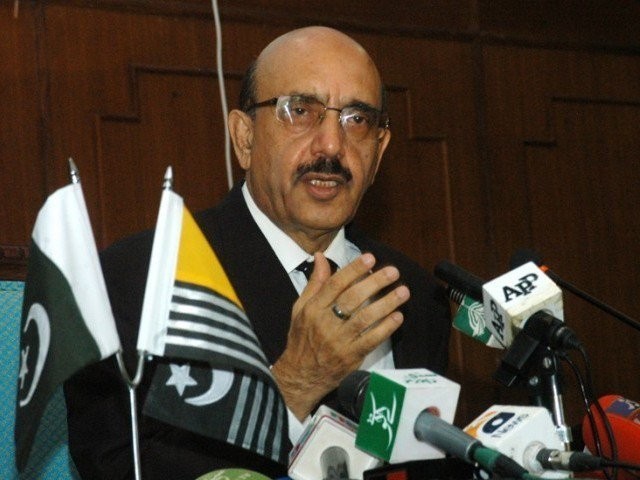 MUZAFFARABAD: Azad Jammu and Kashmir President Sardar Masood Khan on Wednesday said that turning the Line of Control (LoC) into an international border was never considered a viable option to resolve the Kashmir issue.

In an interview with the Global Village Space magazine, AJK president termed Kashmir as an entity, saying any move to slice it to pieces would be a betrayal of the sacrifices offered by Kashmiris over the past 70 years.

“Making LoC an international border will be tantamount to betrayal with the Kashmiris rendering sacrifices for the past seven decades for their right to self-determination,” Khan said.

Kashmiris are shedding blood everyday to achieve freedom from Indian occupation, he maintained.

President AJK highlighted that the majority of Kashmiris want merger with Pakistan, amply evident from the fact that tens of thousands of them chant in favour of the country at the funeral of their loved ones martyred in fake encounters.

This visible display of solidarity with Pakistan sends a strong signal to the people there, and enhances their obligation for a robust political and diplomatic campaign, he observed.

“Making the LOC a permanent border would just sweep the problem under the carpet. Self-determination is Kashmiris’ inalienable right and they are determined to attain it,” he maintained.

“Legally and politically, it would be prudent to make no unilateral concessions until a serious engagement on the resolution of the Kashmir dispute is initiated.” he said.

SC issues notice to Jang, The News over ‘gross misreporting’