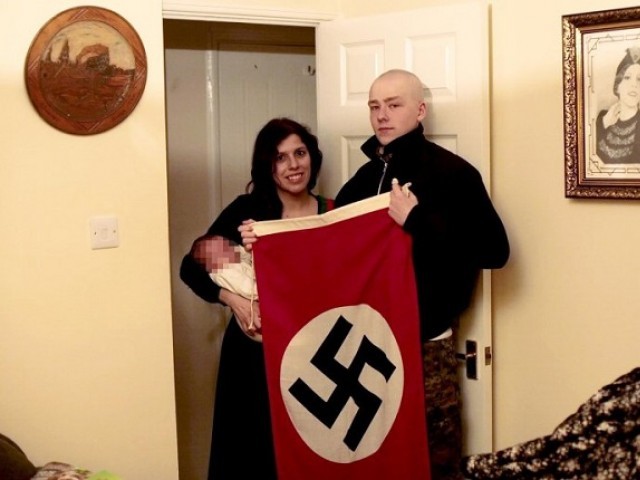 Adam Thomas, 22, and Portuguese-born partner Claudia Patatas, 38, from Banbury in south England, were charged along with Daniel Bogunovic, 27, from Leicester in central England with being members of banned group National Action (NA). PHOTO: METRO

LONDON: A couple who gave their son the middle name Adolf in honour of Hitler were on Monday convicted of being members of a British neo-Nazi terrorist group.

Adam Thomas, 22, and Portuguese-born partner Claudia Patatas, 38, from Banbury in south England, were charged along with Daniel Bogunovic, 27, from Leicester in central England with being members of banned group National Action (NA).

Jurors at Birmingham Crown Court in central England reached a unanimous verdict after being shown photographs during the four-week trial of Thomas wearing Ku Klux Klan robes while holding his baby.

Thomas claimed the photographs were “just play” but also told the court he was a racist.

He was also found guilty of having a terrorist manual on his laptop that gave advice on homemade explosives including a “soft drink can bomb”.

Prosecutors said Thomas had a “fanatical and tribal belief in white supremacy”.

The neo-Nazi group was founded in 2013 and outlawed three years later after it celebrated the murder of Labour MP Jo Cox by a Nazi sympathiser in northern England.

One of its leading members was on Monday revealed to have been British army Afghan battle veteran Mikko Vehvilainen, 34.
The soldier was convicted in March of being a member of NA and jailed for eight years, but reporting restrictions had been in place.
Judge Melbourne Inman said Vehvilainen had a “long and deep-seated adherence” to racist ideology, while prosecutors said he had worked as an NA “recruiter” within the army.

“The Midlands branch of NA, which is just 17-20 of us, have decided to ignore this and we’ve renamed ourselves the Thule Combat League,” he wrote.

“After National Action was banned it went underground and changed its name but it did not disappear,” said prosecutor Deb Walsh.

“These members continued to believe in its racist neo-Nazi worldview, remained in contact on encrypted messaging apps, and organised meetings to keep the group going.”

Three other men — Darren Fletcher, 28, Nathan Pryke, 27, and Joel Wilmore, 24 — pleaded guilty to being members of the banned organisation before the trial began. All six will be sentenced on December 14.