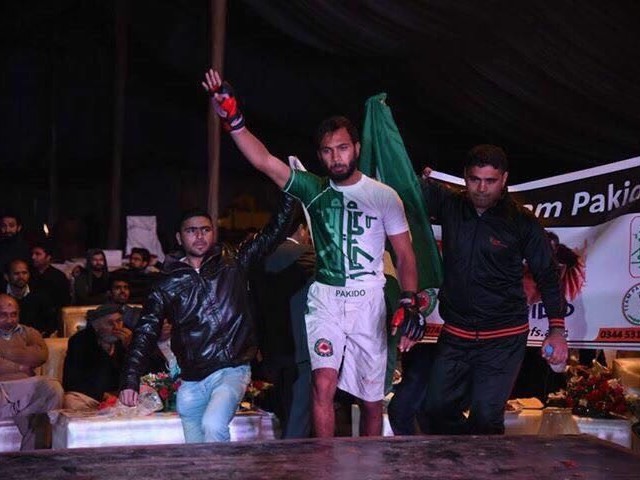 KARACHI: “I eat roti, I may not have the same resources as other fighters, but by God I want to win the One FC bout, with all my might I want to come back with a win,” said Muhammad “The Spider ” Imran as he will be taking on Indonesia’s Elipitua Siregar in the One Championship Warrior’s Dream bout on November 17 in Jakarta.

The 26-year-old will be going against the odds and just the fact that he is competing at the One FC stage is a miracle, given his humble background but solid faith, Imran is aiming at his first One Championship win.

He will be competing in the strawweight bout on Siregar’s home turf.

“My career within Pakistan has been great, but I really want an international win,” the Pakido MMA Club fighter told The Express Tribune. “We had started Pakido with very limited resource. I’m a poor man too. Just to pursue mixed martial arts (MMA) has been a challenge at times, because I don’t have the best facilities or money to invest in myself, but I train with my fellow fighters in Gujar Khan, I train around 150 students. There are poor children like me who may not have any other outlet or option in life, they come and train here with me. This has been my biggest achievement, the academy and the purpose of life to train the kids, but to also make this name for my people, for Pakistan.”

He added that for the November 17 bout he has been training for four months including a month with his mentor Mirza Jalil Ahmed, who came from the US. He said that he makes sure that he gets the training in two sessions each day.

“I used to be a labourer. I would sometimes work at the construction sites and sometimes in the fruit market as a porter. I know I’m strong. I may not have the best diet, if I take that I will need at least Rs1500 per day, which I can’t afford, but I have the dedication and focus to win this time,” said Imran.

Imran is known for his grappling skills, while he had initially started out as a jiu-jitsu student that gave him the edge at grappling too.

But the gap of almost 10 months between his first international bout to his second has been a journey of self-discovery and improvement.

“After losing my first bout to another Indonesian fighter Stefer Rahardian, I lost a lot of confidence. In January I felt I lost a part of me in that bout, given that Rahardian had better record than me and was undefeated at that time, I took it to heart. I just wanted to hide, but then I also understood that I can’t live with that mentality,” explained Imran.

He said that the 10-month gap is a blessing as he has improved his wrestling skills, and looked at his weaknesses more closely. But the biggest impact on him were the comments made after they first One Championship bout.

“People would write me off, they would ask me what happened, they would say that I can only be good in Pakistan, so after a tough time mentally, I found my motivation in those same comments. I thought I should not let this criticism break me, instead I want to prove all of that wrong,” said Imran.

He believes that he will be able to bring Siregar down easily.

“Siregar is undefeated too, he has gone in two bouts, but I have more experience with the sport, I know I can win this,” said Imran.

He has fought in Pakistan’s first MMA Promotion PFC (Pak Fight Club) where he won the straw-weight title.  He is training with some Afghan fighters too as a part of his preparations, while his manager Rizvan Ali is also confident that Imran has the potential to grab the win.

With a new-found confidence Imran has more respect for the sport and he wants to take every bout as an opportunity, no matter the result.

“I’m thankful to One Championship, specially the matchmakers Matt Hume, Ric Auty And Bashir Ahmad for this opportunity and I will not disappoint my country. I respect my opponent and I have seen his last two fights in One FC. The opponents which he had faced were not much experienced like me. I know he is a great wrestler and I am prepared for him.” Imran said. “I’ve learned from my first bout that giving up and hiding is not the way. And I am a different fighter to what I was in January.”