Of Karachi's privileges and problems

Of Karachi's privileges and problems

Speake­rs on the second day of the Karach­i Confer­ence talk about the city and its reside­nts
By Our Correspondent
Published: November 11, 2018
Tweet Email 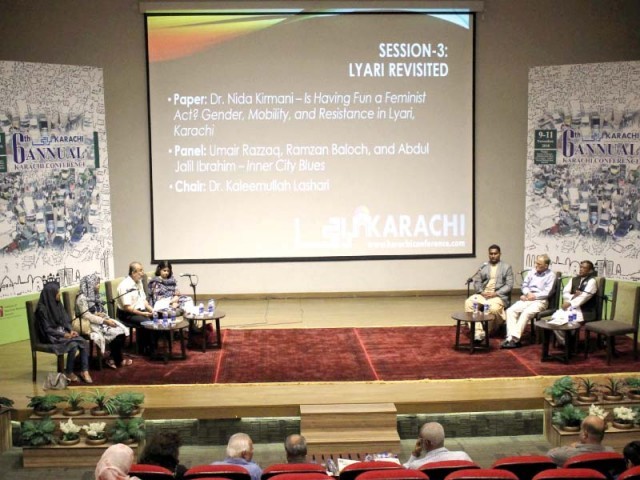 Lawyer and activist Rochi Ram told Karachiites that they should not only look towards the city’s problems for it has several privileges too. In his keynote address in the first session on Saturday of the second day of the Sixth International Karachi Conference held at the JS Auditorium, Institute of Business Administration, the 90-year old citizen from Mithi told the audience that compared to the rest of Sindh, particularly his native Tharparkar, Karachi is still a great city to live, though, as he remembered, Karachi was a genuinely great city the first time he came to it in 1946.

He remembers Karachi as a very neat and clean city where he had heard the streets were washed every day. Karachi’s port was more beautiful as compared to that of Kolkata, Mumbai, and Chennai. He used the old names of these cities-Calcutta, Bombay, and Madras-the names that existed when he had visited them. He said he had come to Karachi for his matriculation exam but had to appear in it in Hyderabad. These two, along with Shikarpur were the only cities in Sindh where one could appear in such an exam.

His father had attempted to start his business here in the 1930s but had failed. This has been his most important memory of this city, he shared with the audience.

Exploring the ‘sacred geographies of Lasbela’

He pointed out that the wealth of all the province came to Karachi but Karachi’s wealth did not reach out to Sindh. “Karachi has a small heart,” he lamented.

He also pointed out that the China-Pakistan Economic Corridor was a great threat to Karachi. “After Gwadar, the CPEC would attack Karachi,” he warned. Karachiites should be prepared for this change, he said.

The founder of the International Karachi Conference, architect Arif Hasan, in his welcome address, introduced Ram by pointing out that he had been an Arya Samaaji and a Congress member in his younger days. Ever since then, he has been an active proponent of human rights. Ram, he said, is a Sindhi nationalist who disagrees with the nationalists because they do not organize the masses. Hasan also praised Ram for his free-of-cost legal support for human rights cases.

While it remains true that Karachi has its privileges, all Sindh cities and towns, including Karachi, are in an abjectly deplorable state with respect to physical infrastructure and management and provision of civic services. There are four services that are required to be provided on a daily basis: water supply, waste water disposal, solid waste disposal and public transport. Without these four service provisions, a city or town cannot function. Efficient governance in a city requires an integrated urban management regime for each city and town.

These thoughts were expressed by Kaiser Bengali, an economist with over 35 years of teaching, research and policy advice in numerous countries around the world, including Pakistan. He pointed out that urban Sindh is victim to two levels of conflict over distribution of power and control of functions: between the provincial and local government and between the elected local government and the unelected bureaucracy. He expressed these thoughts while reading out from his paper, ‘A case for Integrated Local Government’ at the first session, titled ‘Traffic, Transport, and Densification’.

Another panelist, Marvi Mazhar, who has been appointed as an advisor to the Minister for Federal Education and Professional Training, and National History and Literary Heritage Division, shared her paper titled, ‘Situational Urbanism’ at the session. Her paper addressed the socio-economic divide in the city which has resulted in the idea of ‘purana shehar’ (old town) and ‘naya shehar’ (new town) reinforcing the norm which enables people to remain oblivious to those who belong to other demographic circles but reside in the same city. In these divisions, it’s not just the people but the city which suffers too for parts of its history and cultural inheritance is dismissed because it remains in the old town. Her paper included histories and stories of heritage sites in an attempt to redefine the significance of these landmarks.

Filmmaker, academic and musician, Babar Sheikh presented his paper titled, ‘Chronicles of the Walled City’, and spoke about how the city has progressed at the expense of the environment, with concrete walls and billboards replacing trees in the city.

The second session, ‘Governance and Ecology’ took this discussion further. Panelist, Zain Mustafa, the President and founding member of the Society for the Protection of Animal Rights (SPAR) spoke about how many of the issues with animals on our city streets can be associated with poor solid waste management systems and lax regulations regarding their growing population. He urged the audience that as a civil society we have a responsibility towards these animals and they too are residents of this city. Tofiq Pasha Mooraj, who has over 40 years of experience in horticulture, agriculture, landscaping, full grown tree transplants and water management, spoke on ‘Malir’s Agriculture and Karachi’s Food Supply’. While Naeem Sadiq, spoke on ‘People Centered Reforms’ and the issues within the bureaucracy which make it difficult for citizens to avail services.

The third session focused on Lyari, where speakers Umair Razzaq, Ramzan Baloch, and Abdul Jalil Ibrahim and Dr Nida Kirmani brought to light the fact that there is much more to Lyari than its conflicts and gang-wars.

WASA to sack more than 700 employees