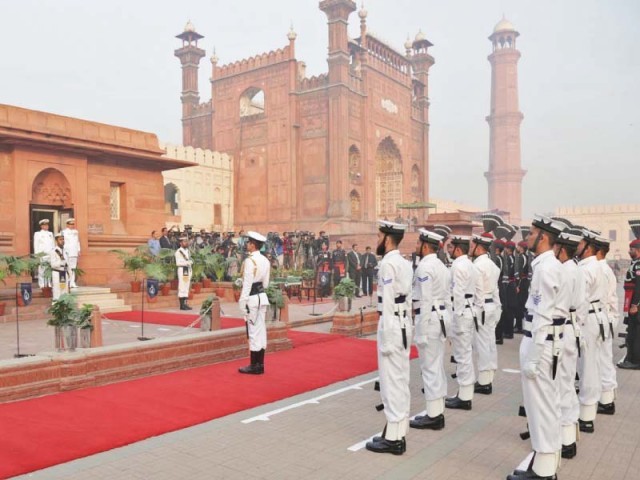 LAHORE: Punjab Governor Chaudhary Mohammad Sarwar visited the mausoleum of the Poet of the East, Allama Dr Muhammad Iqbal, and laid a floral wreath on the grave.

He also offered fateha and prayed for the solidarity, security, progress and prosperity of the country before documenting his impressions in the visitor’s book.

The governor said the ideals of Quaid-e-Azam Muhammad Ali Jinnah and philosophy of Allama Dr Muhammad Iqbal were the basis of the political vision of Prime Minister Imran Khan. “We, as a nation, may maintain our individuality among the comity of nations and restore lost glory of the past if we act upon Iqbal’s poetry and applied it to our lives.”

He added that people should be proud of the fact that Iqbal’s thought and poetry were admired internationally. Sarwar urged the political leadership to gather on one platform and play a role in strengthening the country’s economy and security.

Changing of the guard

A prestigious changing of the guard ceremony was held on Friday at the mausoleum of Dr Allama Muhammad Iqbal on the 141st birth anniversary of the national poet, who envisioned a separate homeland for the Muslims of British India.

An agile yet smartly turned out contingent of Pakistan Navy-clad in immaculate whites assumed ceremonial guard duties with traditional spirit and enthusiasm.

The contingents of Pakistan Navy and Pakistan Rangers formed up outside the Mausoleum and took positions where both the outgoing and incoming guards were inspected by Station Commander (Navy) Lahore, Commodore Naimatullah.

Marching to the band, the Naval contingent took positions at the four corners of the Mausoleum. Simultaneously, Rangers were ceremoniously moved out by their Officer-in-Charge.

The ceremonial guard mounting was followed by floral wreath laying at Iqbal’s Mausoleum by the naval station commander on behalf of the chief of the naval staff, officers, sailors and civilians of Pakistan Navy.

A large number of military and civil officials attended the ceremony.

‘statement’: ‘Hamza should be ashamed of corruption’