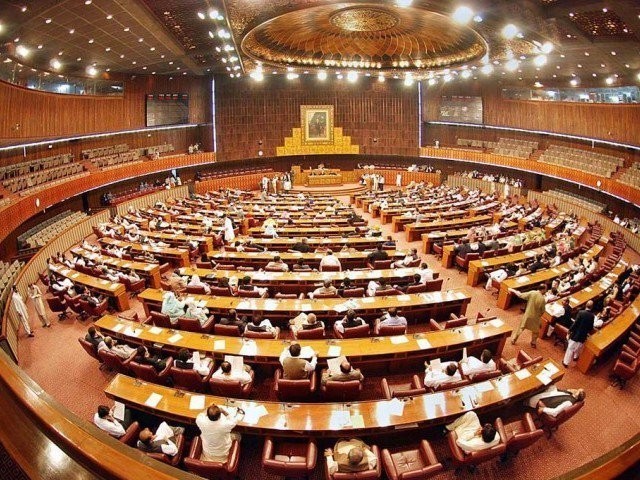 A file photo of the Senate's session. PHOTO: PHOTO: APP

ISLAMABAD: The Opposition has asked the government to share the details about Prime Minister Imran Khan’s visit to Saudi Arabia and China with the National Assembly.

Speaking on the floor of the House on Thursday, the member of opposition, Naveed Qamar said the conditions accepted by the government in exchange of the Saudi package should be shared with the house.

He advised the government to not take steps that would harm Pakistan’s relations with Iran. He said the country should not be dragged into difficult times for the sake of short-term benefits.

Referring to the financial crisis, the Pakistan Peoples Party (PPP) lawmaker said there were no recommendations in the mini budget to increase the revenue of the country. He added that the financial crisis cannot be resolved as long as the government keeps ‘begging’ around the world.

Naveed Qamar said the economic crisis would not be resolved till the government adopts an agricultural economy. He warned that the shortage of water would destroy the agricultural sector.

He criticised the government for increasing the electricity and gas prices and advised the finance minister to take the nation into confidence.

In response to the lack of decorum in the National Assembly proceedings, the government has proposed to constitute a committee that will prepare parliamentary norms for the lawmakers.

He urged that expectations of financial assistance should not be associated with Prime Minister Imran Khan’s visit to other countries.

On the occasion, former interior minister Ahsan Iqbal said it was necessary to identify the real problems with the economy. He called for formulation of an export policy for a decade and urged to reduce the expenditures.

With regard to the population, he said there was not enough planning and development to accommodate the needs of the growing population. He said the country faced environmental challenges and the country needs to have a plan for 10-15 years to address all the challenges.

Meanwhile, Opposition leaders welcomed a government proposal to form a committee that would prepare a code of conduct for members of the National Assembly.

Defence Minister Pervez Khattak on a point of order said, “I have been nominated by the party to discuss with the opposition ways to run proceedings of the House according to parliamentary norms.”

He requested all the members of the house to cooperate and use parliamentary language. He supported the suggestion that the committee should comprise members from the government and the opposition.

Earlier in the session, the treasury and opposition benches exchanged verbal blows after Federal Minister for Information Fawad Chaudhry accused the previous two regimes of ‘destroying every institution in the country’.

Endorsing the suggestion of the Defence minister, Opposition Leader Shehbaz Sharif said that everyone needs to work for the supremacy of parliament.

He said that people had elected them to highlight their problems in an effective way.

The opposition leader requested the government members to not level baseless allegations against anyone. He also requested them to avoid personal attacks.

Meanwhile, Ministry of Railways informed the National Assembly that installation of tracking system was in the final stage for strict monitoring of trains movement and fuel expenditure.

In a written reply in the National Assembly, the Ministry of Railways said Pakistan Railways (PR) had overcome its losses due to better financial discipline, strict monitoring system and austerity measures.

All out efforts are being made to explore new avenues of business to maximize its revenue. Total number of 10 passenger trains would be introduced during 100 days.  The ministry informed that online e-ticketing had been introduced to facilitate travelling passengers at their door steps.

On the occasion, Minister of State for Climate Change Zartaj Gul informed the National Assembly that the government had planted about 47.44 million saplings throughout the country during current monsoon season.    Responding to a question during question hour, she said, the successful model of Billion Tree Tsunami Project implemented in Khyber Pakhtunkhwa would be replicated at national level to plant 10 billion plants.