Phet not, cyclone delayed to Sunday

Phet not, cyclone delayed to Sunday 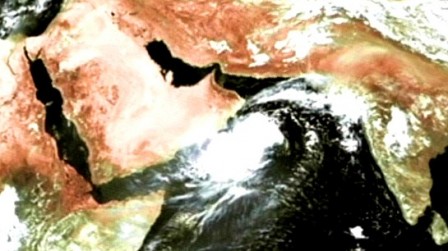 Cyclone Phet as seen through satellite.

KARACHI: The tropical cyclone Phet which was earlier to hit coastal areas of Pakistan on Friday is now expected to approach on Sunday after re-curving from the Oman coastal belt.

According to the 6th cyclone warning of the meteorological department issued on Thursday, the cyclone is likely to hit Oman coastal area first in next six hours and expected to remain stationary over there for 24 hours.

It further said that the cyclone may start re-curving towards Pakistan coastal areas and may lose some of its intensity during the process.

It will turn into a moderate intensity tropical cyclone with maximum sustained wind of about 70 to 90 kilometers per hours with associated storm surge of 3 to 5 meters.

Under the influence of this cyclone, fairly wide spread rainfall with isolated heavy to very heavy falls accompanied by strong gust winds are likely in Sindh and Balochistan coastal areas between Saturday and Tuesday.

Tropical Cyclone Warning Centre of Pakistan Meteorological department has warned that the fishermen of Sindh and Balochistan who are in the open sea should return to the coast immediately. All fishermen are advised not to venture in open sea.

‘The saints will protect Karachi from Cyclone Phet’