Operation clean-up: To clear Saddar, KMC will demolish its own markets

Operation clean-up: To clear Saddar, KMC will demolish its own markets 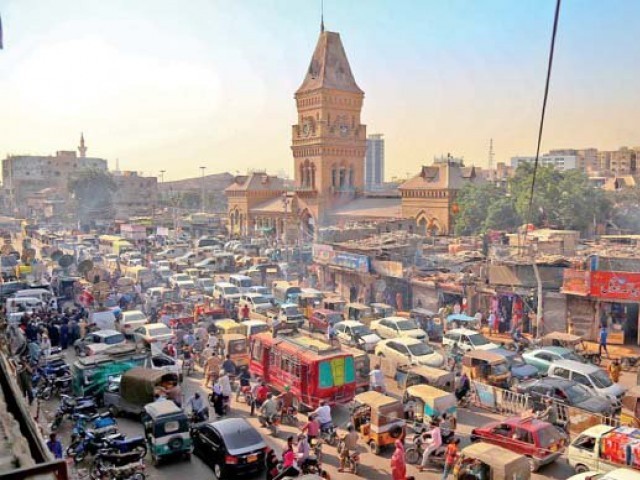 KARACHI: Establish a market. Invite tenants. Sign an agreement and start collecting revenue. After more than five decades, term it ‘encroachment’ and demolish it.

This is what the Karachi Metropolitan Corporation (KMC) is doing in its massive and one-of-a kind operation in Saddar and Empress Market.  The Supreme Court’s (SC) three-member bench, headed by Chief Justice of Pakistan Mian Saqib Nasir had ordered to clear the Empress Market and its adjoining areas of all encroachments, including Saddar’s footpaths in the first phase.

The deputy commissioner, magistrate, cantonment board and Rangers were also ordered to cooperate with Mayor Wasim Akhtar. The operation started in Saddar on Monday. Scores of roadside stalls were confiscated and illegal shops were razed to the ground as the authorities, aided by law enforcement and other civic agencies, clamped down on the illegal constructions on Preedy Street, Express Market, Jahangir Park and other streets in Saddar.

The second phase of the operation, according to KMC’s Municipal Commissioner Dr Saifur Rehman was completed on Tuesday, with the third phase expected to start today (Wednesday).

“Empress Market is our heritage and we will restore it to its original shape,” he said. “We will start from Naveed Clinic and then move toward Lucky Star and Empress Market until Burnes Road.” KMC’s senior director for Anti-Encroachment, Bashir Ahmed Siddiqui, told The Express Tribune that 64 illegal shops were demolished in Regal’s vicinity on Tuesday.

Currently, the KMC is destroying signboards of different brands and illegal structures protruding outside shops in Saddar. But, according to an official, the real target is the markets surrounding the Empress Market, which pay rent to the KMC’s estate department, but have to be demolished in line with the court’s order to revive the Empress Market to its original shape.

Wearing a white Kurta Shalwar, Dad was preparing himself for Asr prayer. He spoke casually while toying with his flowing white beard. “I have dedicated my entire life to this market. There are families dependent on me,” he said.

The general secretary of the market, Muhammad Rizwan, said that all the shops regularly pay rent to the KMC. “We should be provided an alternative space, if this market needs to be demolished,” he demanded, adding that they could also go in litigation against the KMC.

Meanwhile, a former official of the KMC’s estate department, speaking on condition of anonymity, told The Express Tribune that it was in 1965 during Ayub Khan’s regime when the administrator, through a council resolution built these markets near Empress Market. The premises then used to be a public park.

“Hawkers from around the city were relocated to these markets,” recalled the official, under the Municipal Property Act, 1962.  “These are allotted spaces and the shop owners are KMC’s tenants which the corporation cannot vacate so easily.”

On the other hand, KMC’s incumbent estate director, Tasneem Ahmed Khan told The Express Tribune that his department used to earn Rs15 million only from these markets, but they would have to be demolished in order to comply with the court’s order.

On a question regarding the agreement, he said that according to clause four of the agreement, either side can vacate the shops on one month’s notice. “We have asked them [shopkeepers] repeatedly to vacate these markets, but they don’t listen,” he said, adding that now action will be taken.

Urban planner Arif Hassan believes that the court is unaware that there are more than 500 leased shops by the cantonment board and KMC in the area.  The issue, he said, is not about space but reorganisation. “The market can be developed beautifully, without any major expulsion or eviction,” he said, before going on to explain that the tenants can be adjusted in the markets’ surroundings easily. “Carrying out such an operation without a proper study and understanding will have its implications,” he warned.