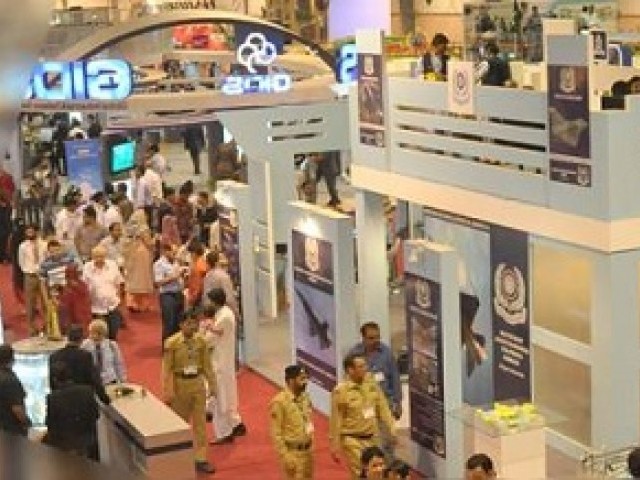 KARACHI: Pakistan is all set to raise the curtain on its own and friendly countries’ latest defence products to show the world state-of-the-art missiles, tanks, fighter jets and replica warships at IDEAS 2018 Pakistan, “Arms for Peace” exhibition later this month. The exhibition is expected to help Pakistan attract new buyers from around the globe.

Approximately 47-48 strategic partners and friendly countries from across the world would participate in the four-day (November 27-30) International Defence Exhibition and Seminar (IDEAS) at the Karachi Expo Centre.

In bolstering ties with Russia, Pakistan is in a win-win situation: Sehgal

Pakistan Air Force and Pakistan Navy are scheduled to present their professional skills at Karachi’s Sea View on November 29. This event, under the name of “Nishan-e-Pakistan”, would be opened for all citizens.

The exhibition will also feature a “counter-terrorism show” by ground forces that was last organised for participants in IDEAS 2008.

“The show would explain the world how Pakistan successfully fought against terrorists…This would provide an opportunity to share our experiences in the war against terrorism with the world,” he said.

To make it a memorable event, Pakistan Post Office would issue a special stamp worth Rs10 on the inaugural day of the exhibition.

“This is for the first time the Post Office is issuing a ticket in connection with the exhibition. The ticket would remain available for purchase at an outlet at the fair,” said Commodore Mahmood.

This time the exhibition is being organised in a different way. The foreign delegates would play a golf tournament to freshen up from hours-long travel, prior to the inaugural ceremony scheduled for November 26.

“Besides…the healthy activity (golf) would provide a platform for business networking, business-to-business meetings and help build soft image of Pakistan,” he said. The three chiefs would participate at their respective service conferences, which are being organised for the first time in the history of IDEAS.

“The exhibition would help Pakistan attracting new buyers from the globe,” he said.

Sindh Chief Minister Syed Murad Ali Shah is also scheduled to hold a reception in the honour of foreign delegates, he said.

He said DIG traffic police would present a traffic plan on November 24; three days before the exhibition is formally opened on November 27 to help commuters find alternative ways towards their destinations instead of using routes in surrounding of the exhibition premises.

According to details, some 500 exhibitors would set up their stalls in 11 halls, including the five under construction temporary marquees, at the Expo Centre. The setup will be including 14-15 countries specific pavilions.

The exhibition will be open for the general public only for one day; November 30. And children under 18 would not be allowed.

Pakistan, US to pursue ‘shared objective of peace’

Responding to a question, Commodore Mahmood said Pakistan signed 14-16 memorandum of understanding (MoUs) for the sale of Super Mushshak, upgrading Al-Khalid tanks and sale of other weaponries in the previous IDEAS 2016.

He said, “Majority of them…(or) at least 50% of them have been materialised so far.”

Further details in this regard will be available on the curtain-raiser day.

Deals included sale of 52 basic trainer aircraft Super Mushshak to Turkey and another 18 to Qatar and Nigeria. Besides, Pakistan and Ukraine had signed an agreement for upgrading the Al-Khalid main battle tanks in the previous bi-annual exhibition.

Local defence production had helped Pakistan save foreign exchange worth Rs120 billion ($1.14 billion) in one and a half year ended June 30 2016.