Nearly 14 millio­n people in Yemen are at risk of famine as the war nears its fourth year
By AFP
Published: November 6, 2018
Tweet Email 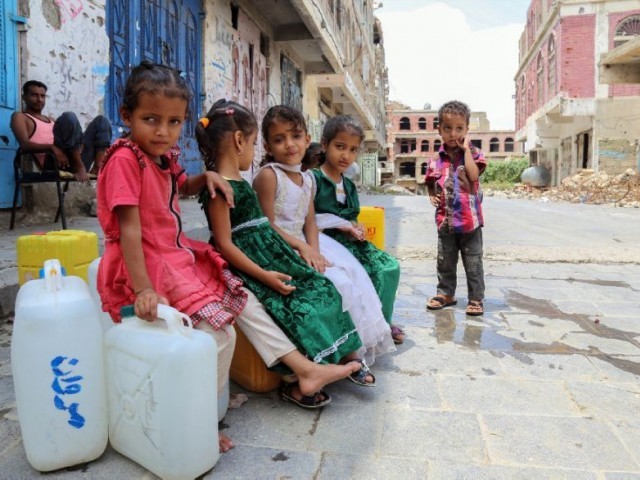 Displaced Yemeni children from Hodeida province sit on water containers in a street in the southwestern Yemeni city of Taez. PHOTO AFP

ADEN: Government troops and rebels clashed again on Tuesday near a Yemeni port city crucial for humanitarian aid, where hundreds of thousands of civilians could be trapped as war closes in.

Five days of battles between Iran-linked Huthi rebels and the army, allied with a regional military coalition led by Saudi Arabia, have left more than 150 combatants dead in the Red Sea province of Hodeida.

A spokesperson for the Saudi-led coalition on Monday said the government alliance had no plans to launch a full offensive to retake Hodeida.

But multiple military officials on the ground reported their troops had encircled the rebel-held city.

The rebels have also confirmed fierce fighting in the area via their Al-Masirah television station.

The fighting comes as the United Nations pushes to restart negotiations between warring parties, after talks collapsed in Geneva in September.

Hodeida is one of the last Huthi strongholds on Yemen’s western coastline. The rebels seized the port, along with the capital, in 2014.

The rival Saudi-led camp, a powerful military alliance that includes the United Arab Emirates, has since retaken most of the country’s ports.

The United Nations’ children’s fund (UNICEF) — which has called Yemen a “living hell” —this week warned an assault on Hodeida would jeopardise the lives of people in the city and across the country.

The port of Hodeida is crucial for aid delivery and food imports to Yemen, where famine looms over 14 million people and a child dies every 10 minutes, according to the UN.

Medics at hospitals in the Hodeida neighbourhood of Bajil reported they had received the bodies of 49 Huthi rebels on Tuesday morning.

Hospitals in government-held Mokha, south of Hodeida, said 15 soldiers had been killed.

Rights groups warn the worst could be yet to come in Hodeida.

Some Saudi-led coalition air strikes in Yemen may amount to war crimes: UN

Doctors Without Borders (MSF) on Tuesday said: “As fighting intensifies in Hodeida, MSF is concerned for patients and staff at Al-Salakhana hospital and for thousands of residents who remain in the city.

“All parties to the conflict must ensure that civilians and facilities such as hospitals are protected in Yemen,” the aid group tweeted.

Save the Children has reported almost 100 air strikes counted by its staff at the weekend — five times as many as in the whole first week of October.

The Norwegian Refugee Council on Monday warned fighting and air strikes in Hodeida threatened “to further deteriorate civilians’ access to safety and aid”.

The poorest country in the Arab world, Yemen is now home to what the UN calls the world’s worst humanitarian crisis.

Nearly 14 million people are at risk of famine as the war nears its fourth year.

The World Health Organization says 10,000 people have been killed since the Saudi-led coalition intervened on the side of the government in 2015.

The cabinet backed the formation of a committee tasked with setting the government budget for 2019, according to state news agency Saba.

It also passed a resolution pushing for the collection of owed taxes and customs “on all taxable imports at all land, sea and airports in liberated areas”, or areas under government control.

The Yemeni riyal has plunged more than 36 per cent in 2018, despite a $2-billion deposit in the central bank by Saudi Arabia aimed at saving the currency.

The riyal’s slide has triggered a sharp rise in the prices of commodities, especially food and fuel, leaving millions unable to afford basic staples.

Macron urges European army to defend against Russia, US