TLP protests: Over 5,000 booked in govt crackdown a day after deal

TLP protests: Over 5,000 booked in govt crackdown a day after deal 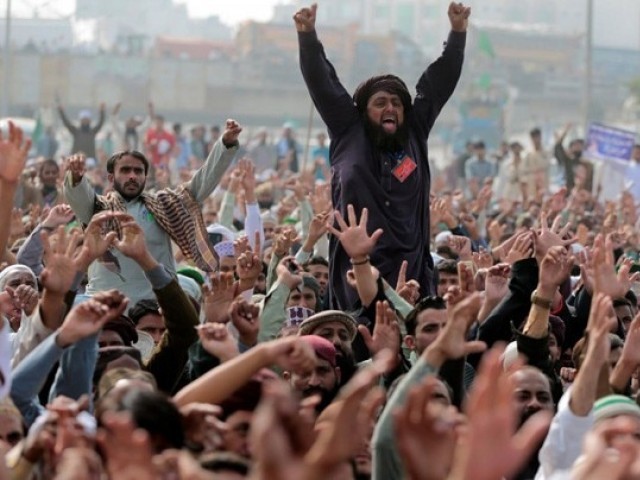 ISLAMABAD / LAHORE: A day after ‘striking a deal’ with the Tehreek-e-Labbaik Pakistan (TLP) protesters, the government on Tuesday swung into action as it started a crackdown against the people who vandalised public properties – in the wake of the apex court’s Oct 31 verdict – while also booking the top TLP leadership.

Prime Minister Imran Khan, who is currently on an official trip to China, reportedly expressed his anger over damage to public and private properties during the three-day-long protests that erupted after the Supreme Court acquitted Aasia Bibi, a blasphemy accused.

The PM ordered the arrest of the people who were engaged in vandalism and directed the federal government to work in collaboration with the provincial governments.

Later, the Interior Ministry started a crackdown across the country and registered FIRs against TLP Patron-in-Chief Pir Afzal Qadri, central leader Khadim Hussain Rizvi and others.

Minister of State for Interior Shehryar Afridi on Saturday received a briefing from various law-enforcement agencies about the current situation in the country.

He said he had decided to start a crackdown across the country on the miscreants who damaged the property and harmed the unarmed citizens in the name of protests.

“I respect the religious scholars who said they were not involved in the damage and that some miscreants were doing this. The interior ministry is taking steps to identify those miscreants,” he said.

Afridi said those who spread provocative material and hate speech on social media would also face action, adding that the Pakistan Telecommunication Authority (PTA) chairman and the Federal Investigation Agency’s (FIA) Cybercrime Wing had been ordered to take action against such people.

The cybercrime wing and the PTA are reviewing such material on social media. The interior ministry has also asked the provincial governments, including the Punjab government, and other agencies to provide details of the damages and footages of the persons involved in vandalism.

Information Minister Fawad Chaudhry said action against extremism and violent protests was necessary and the PTI government was trying to find permanent solutions to the issues. “Only positive actions will solve the problems. The PTI government is resolved to take this steps,” he said while talking to BBC.

He said a permanent solution to extremism and violent protests had to be looked for. “The court will see whether Asia Bibi will leave the country or not,” he said in response to a query.

Minister of State for Communications Murad Saeed also announced that those who damaged the properties on the highways and motorways would be taken to task.

“Videos and photos of these activities will be reviewed in detail.  Those who inflicted loss of billions of rupees on the national exchequer in the name of protests will be held accountable,” he said.

In Lahore, the police registered 11 cases against 1,500 persons including the TLP leaders – Allama Khadim Hussian Rizvi and Pir Afzal Qadri – for blocking roads and creating law and order situation. The FIRs against Qadri and Rizvi have been sealed.

In Okara, FIR was registered against 200 people. Twenty people later got bails and released. The Rawalpindi police also registered 18 cases against hundreds of TLP workers while 16 workers were released on Saturday.

In Islamabad two cases were registered against more than 100 accused, including 20 workers of a religious party. In Karachi’s Gulistan-e-Jauhar and Pehlwan Goth areas, three persons were arrested for firing and forcing people to shut down their businesses.